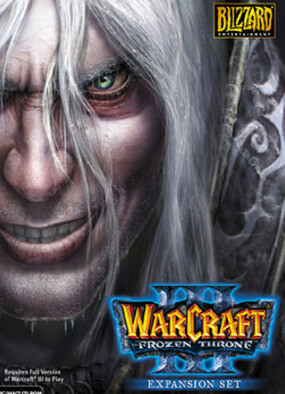 Warcraft III: The Frozen Throne is the expansion pack for Warcraft III: Reign of Chaos, a real-time strategy video game by Blizzard Entertainment. It was released worldwide on July 1, 2003 for Microsoft Windows and Mac OS X. The Frozen Throne builds upon the story of Reign of Chaos and depicts the events after the main game's conclusion. The single-player unfolds from the perspective of two new protagonists—the Night Elf warden Maiev Shadowsong and the Blood Elf prince Kael'Thas—as well as returning protagonist Arthas Menethil. Additionally, the expansion contains Act I of a separate Orc campaign that is independent from the main storyline with Blizzard releasing Acts II and III via patch in December 2003, taking in player feedback of Act I when developing these chapters.

The expansion adds new units, buildings and heroes for each faction, two new auxiliary races, five neutral heroes (with three more later added by patches) as well as a number of tweaks to the gameplay and balancing. Sea units were reintroduced which were absent in Reign of Chaos. Battle.net-powered multiplayer was expanded by the addition of clans, automated tournaments and new maps and custom scenarios.

Development began in October 2002, shortly after the release of the main game and the expansion was announced on January 22, 2003. Public beta tests allowed 20,000 players in two waves to try the new features. Support continues even after release, with Blizzard adding new content and balancing changes as well as support for newer hardware.

The Frozen Throne received generally favorable reviews from critics. Most reviewers praised the mission design of the single-player campaign for positively deviating from the standard real-time strategy game formula. The design and audio of the new units was generally considered fitting, though a few critics bemoaned the graphics and some of the voice-acting. By August 15, 2003, it had sold more than one million copies.

Warcraft III: The Frozen Throne is a real-time strategy video game that puts players in control of a group of units and buildings in order to achieve a variety of goals. The expansion fine-tunes the gameplay of the main game rather than changing it. The food limit and the upkeep requirements, which dealt a penalty on resource gain when too many units were active at the same time, have both been increased slightly, leading to the ability to mobilize somewhat larger and more powerful forces. The cost of buildings has been decreased as well, allowing for a quicker start of the game. The weapon and armor type system has been completely revamped and a lot of units have had their weapon or armor types changed, and the weapon types are effective and ineffective against different armor types compared to Reign of Chaos. Changes to building costs and the addition of new early-game defensive structures serve to deter early-game tactics that relied on rushing the enemy with hero units. In addition to treasure items found in the main game, enemies now will also leave "runes" upon defeat that can be used to replenish health or mana. In addition, The Frozen Throne re-introduces naval battles, which were previously featured in Warcraft II: Tides of Darkness and its expansion, but almost completely absent in Warcraft III.

For each faction, The Frozen Throne adds several new units and buildings, including a player-controlled shop, and one new hero, a kind of powerful unit which each can only be recruited once, per faction. To complement the new shop, normal units can be upgraded to carry items. Two new Factions, the Naga and Draenei, have also been added. The Naga feature in all four campaigns and have their own production and defense buildings as well as unique units with separate skills. While enemies in some single-player missions, players can control them in others. The Draenei on the other hand are found only in one of the campaigns and are classified by Blizzard as creeps, i.e. neutral units that attack all parties equally. The expansion also added five neutral hero units, some of which appear in the single player campaigns. Neutral heroes can be used in melee maps via the Tavern, a neutral building used to hire them. The tavern can also instantly revive any fallen hero, with an increased resource cost, and reduced health and mana of the revived hero.

The single player missions have been given more varied objectives, ranging from controlling multiple armies at the same time to forcing players to make do with only a limited number of units. Unlike in previous Warcraft games, Blizzard did not include the Orcs in the main campaign. According to level designer Tim Campbell, the company failed to come up with a plausible story-based reason why orcs should appear in the main story line. Blizzard instead decided to create a more RPG-driven campaign that focuses on controlling one or multiple heroes on a network of interlinked maps. As such, base building, resource gathering and unit training are absent from most of the campaign while heroes can be leveled up past the normal 10-level limit. The orc campaign contains almost 40 items specifically created for it. Both campaigns combined add approximately 40 hours of new gameplay.

When playing against the computer on a custom map, players can now select a difficulty level for the computer opponent. The multiplayer aspect was expanded upon with the implementation of clans and automated tournaments that include a strict 30-minute time limit. It also added the ability to chat with others while waiting for a game. The expansion includes 62 new multiplayer maps and custom scenarios based on popular mods and allows up to twelve players at the same time. If an ally leaves the game, their resources are now shown in a separate window and can be transferred.

The Frozen Throne also includes an improved version of the World Editor program that can be used to create custom maps and scenarios to play against the computer or other players. The improved World Editor allows the user to do more custom work with regards to editing skills, providing more functions in the triggers, new units, more global map settings, and three new tile-sets to work with. Creators can now link multiple maps together and make events on one map affect another map. The Orc campaign was specifically made with the goal in mind of showcasing what the new World Editor was capable of. While Blizzard does not officially support the World Editor, the Frozen Throne version offers more options and documentation.