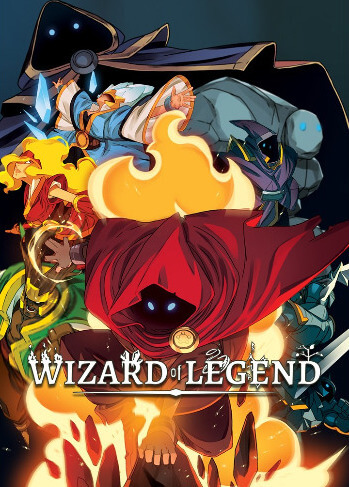 Wizard of Legend is an indie roguelike video game released by American studio Contingent99 and Humble Bundle in May 2018. Funded through Kickstarter in 2016, players take control of a wizard as they traverse a procedually-generated dungeon, using a wide variety of spells to defeat mobs, three major bosses, and a final boss to earn the title "Wizard of Legend". The game received generally favourable reviews.

Wizard of Legend is a top-down 2D roguelike game where the player controls a wizard as they attempt to complete a 10-floor procedually-generated dungeon, the 'Chaos Trials', using a selection of various spells to defeat various enemies and bosses and become the titular "Wizard of Legend". Each button or key casts a spell, called 'arcana', in the form of a basic attack, an evade, a 'signature' (more powerful) arcana, and then a variety of alternate spells to defeat enemies, bosses and transversing the dungeon. New spells can be bought in the dungeon with collected money, or added permanently (to equip before entering the dungeon through 'Chaos Gems', a persistent currency. Passive upgrades, called Relics, are collected in the same way. The game is completed after defeating three major bosses (wizards representing fire, earth, water, air, and thunder), and a final boss representing dark magic, named void.

The game received generally favourable reviews upon its release in May 2018, holding a score of 76/100 on Metacritic. Kevin McClusky of Destructoid awarded it 6/10, saying "Spell effects are beautifully animated, and combat feels fluid and entertaining." but criticised frame skips on the Nintendo Switch edition of the game. Dominic Tarason of Rock, Paper, Shotgun said "Wizard of Legend is a good, if lopsided game. The moment-to-moment combat is highly flexible and seldom anything less than satisfying, especially in co-op.", but criticised the repetition of the dungeon, saying "If you can overlook the repetition in targets and mix up your own playstyle, this one’s an easy recommendation, but for players who stick with the tried-and-tested, Wizard of Legend can slip into monotony."

Bradley Ellis of Easy Allies awarded the game a 7/10, saying "Wizard of Legend nails the feeling of being a grand wizard. Experimenting with all the different spells is a blast, and there are some heart-pounding boss fights. The peripheral elements fail to deepen or expand Wizard of Legend, but the core gameplay makes for a good time if you’re looking to fill a roguelike fix."