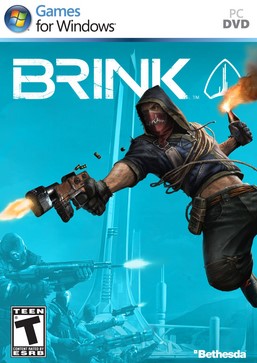 Brink is a first-person shooter video game developed by Splash Damage and published by Bethesda Softworks for Microsoft Windows, PlayStation 3 and Xbox 360.

In Brink, two factions, Resistance and Security, battle in a once-utopian city called The Ark, a floating city above the waters of a flooded Earth.

Brink has Steamworks integration, including Valve Anti-Cheat. It runs on id Tech 4 and has an updated rendering framework with improved support for multiple CPU cores. Brink is a first-person shooter with a focus on parkour-style movement. Online multiplayer servers hold up to 16 players; players can play cooperatively or competitively, or against artificially-intelligent bots.

The game received mixed to average reviews. As of 2012, Brink had sold 2.5 million copies. The PC version of Brink became free-to-play on 22 August 2017.

Splash Damage developed the SMART (Smooth Movement Across Random Terrain) System. By noting a player's position and predicting what he is trying to do, the system automatically navigates complex environments without interaction. By holding down the SMART button, a player will automatically clear obstacles without the need of complex button input from the player, like in Mirror's Edge. SMART automatically mimics adaptive parkour, similar to Prototype.

There are several appearance combinations that a character can have. One of the most significant appearance categories is body type. There are three distinct body types in Brink: heavy, medium, and light, and each have their own positive and negative qualities.