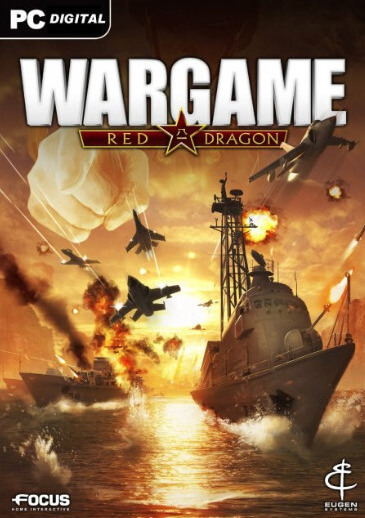 Wargame: Red Dragon is a real-time strategy video game developed by Eugen Systems and published by Focus Home Interactive, released on April 17, 2014. It is the sequel to the 2013 Wargame: AirLand Battle.

Wargame: Red Dragon includes 21 nations and over 1,900 units to play with. The game is set during an alternate history Cold War where the Soviet Union doesn't collapse. The battlefield is viewed from a top-down perspective, giving the player an overview of the action. The player can decide which units they want to deploy before a battle, creating a deck of specific individual units. The player can choose from infantry, various forms of armored units, air forces, and naval forces, with further customization available, e.g. choosing between infantry with anti-aircraft or anti-armor capabilities, or whether to deploy air-superiority aircraft or ones suited for supporting ground forces. The opposing sides will typically start on opposite sides of the battlefield, with both parties being awarded an initial amount of deployment points that determine how many units they can spawn at the start of the battle. Units in the game have several attributes such as their amount of fuel or ammunition; If a unit runs out of fuel or ammunition, it will be unable to move or shoot, respectively. Players can manage these attributes by deploying supply units which repair and re-arm units. Units also have morale which can degrade when it is under heavy attack, reducing the unit's combat effectiveness and potentially causing it to rout, leaving it unresponsive to player commands.

Following initial deployment, players must gradually hold and secure additional designated zones on the map by deploying special command units and supporting forces to them. Holding these zones awards the player with additional deployment points over time, allowing them to bring in additional units during the course of a battle. Any units ordered during the battle will arrive from a specific command point; a deployment zone typically located on the edge of the map from which units ordered will enter the battle. If such a point is lost, the player will be unable to call in reinforcements until it is re-secured. They will lose the game if they possess no units with which to capture a deployment zone. Other ways of losing include running out of units and having fewer points than the enemy at the end of the battle.

The game features both free and paid DLC. The first three free DLCs add a number of multi-player maps as well as units to existing factions, while the paid DLC adds entirely new playable nations.

As of May 20, 2016, the Armed Forces of the Netherlands became a downloadable playable faction for the game. Unique Dutch vehicles such as the DAF YP-408 and the DAF YP-104, as well as a mix of British, French, German and American units licensed for Dutch use.

On June 23, 2016, Eugen Systems announced that the Israeli Defense Forces would become the second downloadable faction for the game. Unique Israeli Army equipment, most notably the Merkava series of tanks, are now available in game, alongside many other Israeli units.

With the announcement of the Israeli army DLC, Eugen also announced the ongoing work of a third DLC called Double Nation Pack: REDS, this time introducing Yugoslavia and Finland into the game as USSR allies. This DLC includes 186 new units and was released on December 1, 2016.