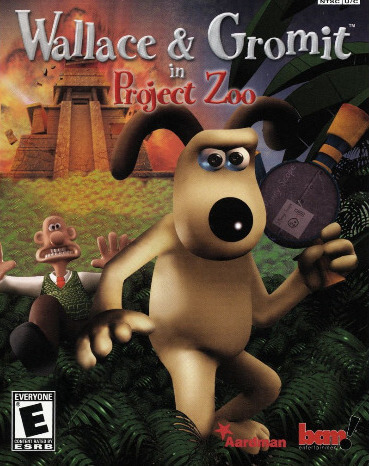 Wallace & Gromit in Project Zoo is a platform video game developed by Frontier Developments and published by BAM! Entertainment (European distribution being handled by Acclaim Entertainment) for the PlayStation 2, GameCube, Xbox and Microsoft Windows. It is the first video game featuring Aardman Animations' characters Wallace & Gromit and also features the voice of Wallace, Peter Sallis reprising his role.

As Gromit, the player must use Wallace's bizarre inventions - including the Porridge Gun, Turnip Launcher, Springy Boots, and Gyrocopter - to battle Feathers McGraw's robotic minions and rescue the baby animals in typical platform game style.

The story sees the duo take on Feathers McGraw, the penguin villain from The Wrong Trousers, once more. Feathers has escaped from the penguin enclosure at West Wallaby Zoo, and taken over the entire zoo, kidnapping young animals and forcing their parents to work for him, helping him towards his ultimate goal - turning the zoo into a diamond mine.

Wallace and Gromit, meanwhile, have adopted one of the zoo's baby polar bears, named Archie. As they go to visit the zoo to celebrate his birthday, they find the zoo closed. A quick spot of inventing back at the house, and they prepare to embark on their latest adventure. Hiding inside a giant wooden penguin, a parody of the famous Trojan horse, they infiltrate the zoo, and set about rescuing the animals and undoing Feathers' work.

As Wallace and Gromit delve deeper into the zoo they discover ancient temple exhibits (complete with booby traps), drills, lava, loads of machinery, and even snow slides as they travel about the six levels; in each they must save three baby animals: elephants in the Jungle House and Temple, beavers in the Mines, gorillas in the Volcano, pandas in the Warehouse, polar bears in the Ice House, and zebras in the Diamond-o-Matic, who, with help from the duo, imprison Feathers in the city zoo's penguin house once more.

Wallace & Gromit in Project Zoo received "mixed or average reviews" on all platforms according to the review aggregation website Metacritic.