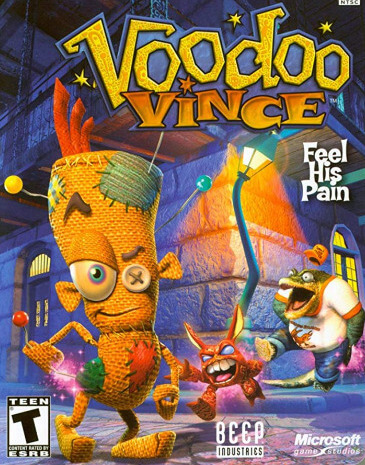 Voodoo Vince is a 2003 platforming video game created by Clayton Kauzlaric, developed by American studio Beep Industries and published by Microsoft Game Studios for the Xbox. Unlike other Xbox games, however, this one is not compatible with an Xbox 360. It was released in North America on September 23, 2003, in Europe on October 17, 2003 and in Japan on July 22, 2004. A remastered version for Microsoft Windows and Xbox One was released on April 18, 2017.

Scattered throughout the game's levels are special items for Vince to collect: Zombie Dust Bags, which upon collecting 100 will increase Vince's health bar; Hearts, which give Vince extra lives; Beads, which are collected from fallen enemies and fill Vince's voodoo power meter; and Skull Pages, which upon collecting all in a certain level will reveal a Skull. If the player manages to find, chase, and capture the Skull, it will increase the number of voodoo powers Vince can perform at one time. Many levels also offer a trolley station, which allow the player to travel between different levels of the game.

Many of the game's levels have some sort of puzzle in which Vince must activate some sort of device in order to use it to inflict pain on himself to destroy a larger enemy (the bosses in particular). For instance, in one of the first levels of the game Vince must defeat a pair of unruly gas pumps, by setting himself on fire and then throwing himself in a puddle of gasoline surrounding the gas pumps.

Several levels differ from the standard gameplay the player experiences through the rest of the game and involve piloting a vehicle or playing a minigame. Over the course of the game, the player controls Vince piloting an airplane, a swamp boat, a submarine, a bumper car, and other vehicles.

Vince — Vince is the third best of Madam Charmaine's voodoo dolls. As a voodoo doll, he has the ability to hurt himself to hurt his enemies. Vince is only ten inches tall and is made almost entirely of burlap. He has a rather sarcastic attitude, often pointing out and criticizing obvious video game concepts without breaking the fourth wall.

Madam Charmaine — Madam Charmaine runs a voodoo shop in the French Quarter of New Orleans. She helps people who need it and sometimes uses Vince if necessary. She is wise and has great knowledge of magic and crafting voodoo dolls. Since Vince is her creation, she maintains a telepathic connection with Vince and guides him through the game.

Kosmo the Inscrutable — A seventh grade drop-out, Kosmo has plans for world domination, and has attempted many times to obtain Zombie Dust, the source of Madam Charmaine's powers. He runs the Carnival De Prave, where he slowly hatches his plan to conquer the world. He often appears as a floating disembodied head, taunting Vince and telling the voodoo doll to turn back.

Jeb & Fingers — Kosmo's clumsy henchmen who are unable to find better jobs. According to their bio in the game manual, Fingers lost his fingers in a carnival ride accident.

Back in the voodoo shop, Vince is given life as a result of the zombie dust's power. After a telepathic communication from Madam Charmaine, Vince leaves in order to rescue her. Vince travels through the French Quarter of New Orleans, where he defeats a few enemies in his way such as a sleepy "Piggy Bank of Doom" and Reggie and Primo, two unruly gas pumps. In the square, Bones McMurty, a skeleton jazz musician, tells Vince that he can find many answers in a nearby museum, but that he will only let him in if Vince plays a song with him. After exploring some of the shops in the square and producing a trumpet, Vince does a duet with the skeleton, who lets him into the museum. Inside, the floating head of Kosmo causes a dinosaur skeleton named "The Bone Goliath" to come to life and attack Vince. Using his voodoo powers, Vince defeats the dinosaur and discovers a hidden tunnel beneath its feet.

After falling through the tunnel, Vince finds himself in the underground city of Roachfort, where he meets Professor Ethel, an egotistical turtle who is trying to make a balloon that will take them back to the surface. The professor sends Vince through Roachfort to gather supplies for the balloon, but when it is complete the balloon fails to take off due to too much weight. The professor chooses between her personal belongings and Vince, and decides to throw Vince off. After defeating the "obligatory boss battle" (a two-headed cyclopean alligator named Janice), Vince finds a tank of helium, which he uses to inflate himself and rise to the surface.