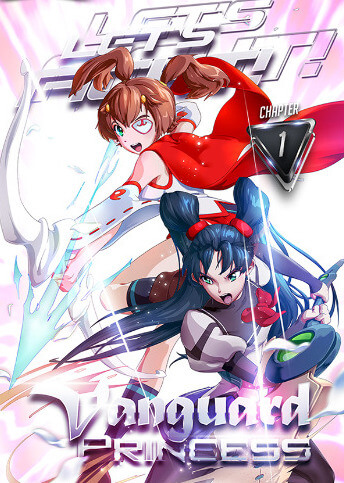 Vanguard Princess is a 2D fighting game featuring an all-female cast. The player selects both a fighter and a support character, who follows the fighter and can assist her.

A mysterious woman with supernatural powers (the game's boss) is captured by the government. Her powers are accidentally unleashed, bestowing various young women with magical powers.

Vanguard Princess was fully developed by Tomoaki Sugeno (or Suge9), an ex-Capcom sprite designer who worked in games like Resident Evil 3: Nemesis and made character sprites for The King of Fighters EX: Neo Blood. Sugeno uses Fighter Maker 2nd for his work, a popular graphic engine for Windows by ASCII. Sugeno designed and illustrated the game by himself, but the music was taken from "nash music library", a royalty-free library of songs. Sugeno also used voice actors to record the voices for all the characters. Sugeno planned a future update called Vanguard Princess Prime which would introduce a new character named Rikako but has since ceased development on it.

An English version was released by eigoMANGA on February 2013 on Amazon.com to North America and Europe. They released a cloud version of the game on the Onlive game service on April 2013. A notable difference in the English version is that the game edits the explicit content in the original Japanese version. The English version also unlocks Hilda as a playable support character. A downloadable PC version of the game was released via Steam on March 3, 2014 after being Greenlit by the community. This version comes with the original English release, plus a free, optional Director's Cut add-on, which returns previously removed content to the game.

After the official release, Vanguard Princess was initially picked up on by video game websites such as Daiken, Kotaku  and Siliconera. Later it was reported by Famitsu and IT+Media.