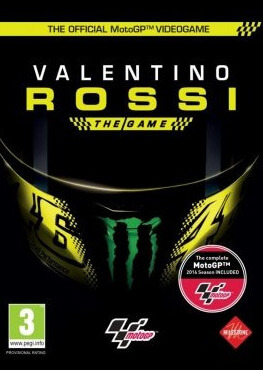 Valentino Rossi: The Game is a motorcycle racing video game developed and published by Milestone srl. The game was released for Microsoft Windows, PlayStation 4, and Xbox One on 16 June 2016. It is the official video game of the 2016 MotoGP season. The game is also endorsed by Italian professional motorcycle racer and multiple MotoGP World Champion Valentino Rossi. This was the first Videogame under Milestone srl not released on PlayStation 3 and Xbox 360.

The 2016 official MotoGP video game incorporates plenty of new details dedicated to the 9-times World Champion, Valentino Rossi, as well as all the classic features which have distinguished the series over the years, and the 2016 MotoGP championship season. The player can participate in the official MotoGP World Championship, retrace Rossi's career from its beginnings to the present day, take control of a rally car and let loose on various tracks such as the Monza Rally, participate in thrilling Flat Track races, and discover the world of Valentino Rossi's Ranch.

The game was well scored. With a Metacritic score of 78/100 and Game Rankings score of 80%.