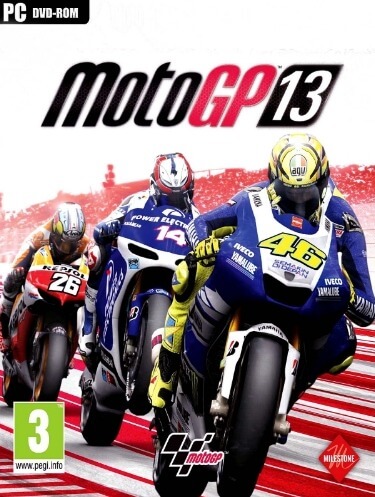 MotoGP 13 features all the tracks, riders and teams from the 2013 season of the MotoGP, Moto2 and Moto3 world championships.

MotoGP 13 features 4 single player game modes: Grand Prix, World Championship, Career and Time attack. Grand Prix is a standard mode where the player picks a class, team and rider along with the track and weather conditions. This game mode takes the player across a single Grand Prix weekend including practice, qualifying and the race. World Championship mode allows the player to ride a full or custom season in either MotoGP, Moto2 or Moto3.

Career mode is the main single player mode and incorporates first and third person elements. Upon a few wildcard events, the player will earn a ride in Moto3 and begin their career. From here the player rides through multiple seasons, earning new rides with the aim of ultimately becoming MotoGP world champion. Career mode boasts many new features to MotoGP video games. These include Parc Ferme, motorhomes and a walkable garage. The career mode is also expanded with objectives given from your own Personnel Manager.

Time Attack allows the player to race themselves endlessly against the clock. Multiplayer features online game modes as well as split screen multiplayer.

Multiple physics settings and aids allow for beginners as well as the experienced to have an immersive experience.

A brand new weather system also features in MotoGP 13. The player can select from 5 weather options one of which is dynamic where the race could start in dry conditions and then begin to rain during the race.

The game features in game commentary from former MotoGP international commentator Gavin Emmett, a real life based HUD and a brand new helmet cam similar to the one seen in Shift 2: Unleashed.

A demo of the game was released in early June and players would be able to choose either Valentino Rossi or Marc Márquez and race 3 laps at Circuit de Catalunya. The game features 100 GP Levels which are unlocked by gaining XP Points from racing.

The PlayStation Vita version received "generally favorable reviews", while the rest of the console versions received "average" reviews, according to the review aggregation website Metacritic. The game reached number 8 in the UK sales charts.