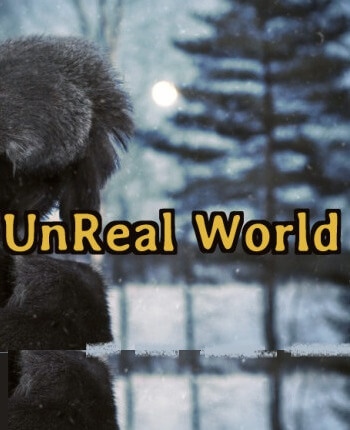 The game world features aspects from Finnish mythology and folklore. The player adopts one of ten Finnish cultures with occupations including fisherman, hermit, trapper or tradesman.

The game has both real time and turn-based elements. The main aspect of the game is on survival. Unexpected events like a snowstorm can lead to a quick death of the player character. UnReal World focus is simulating a harsh environment, where survival is the main challenge for most players. The game simulates a lot of details like frostbite of individual body parts. The world includes different animals, cultures, vegetation and climate. The player can roam freely in the world and manipulate a wide range of aspects like hunting and skinning animals, constructing shelters, etc.

The graphics are simple 2D sprites. The sprites have some animation, and the direction of the individual units is expressed with a small arrow. The game uses a fixed resolution of 800x600 pixels.

Version 1.00 of URW was completed in 1992, and resembled a more traditional roguelike game (like ADOM). The ASCII gameworld was medieval fantasy, with elves, orcs, mages, magic potions, dungeons, etc. Development of the game continued through 1995, along the way seeing a complete rewrite in C. Even in these first few releases, features were established that would become the essence of the modern game. These included varied combat options and aimed attacks, a split UI layout, open-ended game play, random generation of wilderness, villages, and dungeons and their features, wilderness skills (fishing, tracking, foraging, etc.), and the introduction of "early cultures" which replaced the high-fantasy style races and classes.

1996–1998 (v2.9–2.20) saw more developments related to wilderness survival, sound and graphics, and historical setting. A temperature and precipitation system was added, along with the necessary hideworking skill to buy and sell fur clothes and the ability to build shelters. Starvation became possible, and incidentally, many biogeographically accurate animals were also added, including bears, wolves, reindeer, beaver, salmon, foxes, burbot, ermines, and polecats. Animals and items could now persist (and be tracked) across the entire game world, not be drawn conditionally when a player zooms in to an area. The remaining high-fantasy elements were replaced by more realistic ones based on Iron Age fenno-ugrian mythology and culture. Additional NPC (and playable) cultures were added, completing the ten that are still in the current versions. Sound effects and music first appeared, and the graphics fully transitioned from ASCII to a sprite-based display.

In 1999 the game transitioned from DOS to Windows-based, allowing significantly more memory to be used and eliminating Windows compatibility issues. The resolution was also increased. A version of the game was published on a CD-ROM, renamed "Iron-age Now", and distributed to Finnish libraries as an educational tool.

Many changes were made around 2000–2004 (v2.40–2.80) as Sami felt an "urge to dive deeper and deeper into cultural roots of ancient finns". Music and photos were added which reflected the primitive, iron-age setting and the traditions of the people who lived there. The monetary system was removed, "abundant imported goods" and metal goods were trimmed, new types of animal traps added, agriculture became possible for the player, and hideworking was expanded to allow the player to produce furs and leather. These changes further centered the gameplay on self-sufficiency.

The next technological leap for URW occurred in 2005, when it was ported to native Windows and utilized SDL. This change enabled platform-independent development and better Windows compatibility, but necessitated a re-writing and re-drawing of the majority of the game, including the addition and upgrading of sounds and music. The new platform also enabled true color mode, where previously it was 256 colors (VGA), and mouse support.

The current major version, 3, began in 2007. The next two years of releases (until 3.11) brought more changes to the user interface, graphic style, and soundscape. The game world was made larger and optimized to run faster. Many tiles were redrawn, and there were new terrain types added, as well as new plants, mushrooms, and berries. NPC and animal AI improvements expanded the dialogue options and allowed players to give orders to companions.

In 2009, the terrain system was overhauled, and the AI for NPCs and animals was improved. The game world was expanded to six times as large as it was previously, and new terrain types and per-tile elevation were added. This release was considered by Sami as the "biggest core element overhauls in the history of the game".

Throughout the years, UnReal World has been praised for its depth, realism, atmosphere and immersion, and value. The Home of the Underdogs ranks UnReal World a "Top Dog". IndieDB.com voters give URW a 9.7. Rock, Paper, Shotgun listed UnReal World as the 26th best role-playing game on PC.