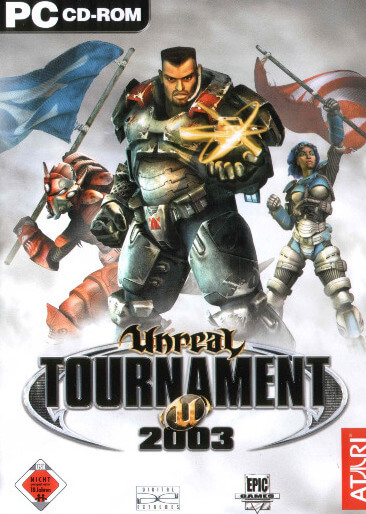 Unreal Tournament 2003 is a first-person shooter video game developed by Epic Games and Digital Extremes, and published by Infogrames under the Atari brand name. It is designed mainly for multiplayer gaming. The game is part of the Unreal series of games, and is a sequel to Unreal Tournament (UT99). The game set a record for the number of downloads (1.2 million) when the demo was released, which is a reflection of the popularity of the original UT. In addition, the game engine has been widely licensed for games such as the Tom Clancy's Rainbow Six series, Splinter Cell, and America's Army. Its sequel/expansion, Unreal Tournament 2004, was released on March 16, 2004.

The available combat modes are:

Deathmatch — Frag other players as much as possible to gain the highest score.

Team Deathmatch — Two teams go head to head to be the best fragger.

Capture the flag: Players must invade the enemies' base, capture their flag and bring it back to his/her base in order to score.

Double Domination — In double domination two teams must control two points on the map. Holding both locations for a certain period of time gives points to a team.

Bombing Run — Bombing run can best be described as Unreal-style American football where the player gets the ball and has to take it into enemy territory and score in the enemy force's goal. Players can pass to other teammates. Getting killed causes the ball carrier to fumble the ball. The ball launcher is used to carry the ball, it is not a weapon but helps the player heal when he/she is in low of health. 3 Points are awarded for field goals (shooting the ball through the goal), and 7 points are given for touchdowns (carrying the ball through the goal), although the levels are often designed such that this kills the ball carrier.

Last man standing — All players in this gametype spawn with a limited number of lives. The last remaining player to still have lives wins the match.

Invasion — A co-op gametype in which the players attempt to kill the invading alien AI. Each player has one life.

In the United States, Unreal Tournament 2003 sold 360,000 copies and earned $13.6 million by August 2006. At the time, this led Edge to declare it the country's 45th-best-selling computer game, and best-selling Unreal title, released since January 2000. Combined sales of all Unreal computer games released between January 2000 and August 2006 had reached 1.8 million units in the United States by the latter date. In December 2002, the game received a "Gold" sales award from the Verband der Unterhaltungssoftware Deutschland (VUD), indicating sales of at least 100,000 units across Germany, Austria and Switzerland.