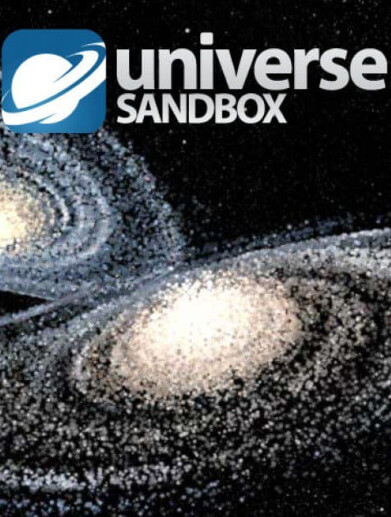 Universe Sandbox was designed primarily by Dan Dixon, who worked on the educational project for over fifteen years before launching the full version in May 2008. Dixon had worked full-time on the project since 2010, founding the company Giant Army the following year. Since then, he has hired eight additional designers for the company.

Both realistic and fictional simulations appear in Universe Sandbox, with each area of outer space being placed by default or according to the player's preference. Real simulations include the Solar System, which includes the eight planets, five minor planets, 160+ moons, and hundreds of asteroids; and predictions of future events such as the Andromeda and Milky Way galaxy collision which will occur in 3.8 to 4.5 billion years. During gameplay, the player may be introduced to the regions that include the 100 largest bodies in the Solar System, the nearest 1000 stars to the Sun or the nearest 70 galaxies to the Milky Way. A visual size comparison of the largest known stars and planets can be explored, and real time animations of events like the Apophis asteroid passing near Earth in the year 2029 can be watched. Comets can be observed colliding into planets, such as the Shoemaker Levy 9's collision with Jupiter. The trans-Neptunian object 2008 KV42 with a retrograde motion orbit can be seen in a simulation. Moons are able to be converged into planets, and may be able to affect the planet's atmosphere or minerals. Players are able to view the Rho Cancri (55 Cancri) star in the constellation of Cancer; they can see the five known planets in the system. The Pioneer and Voyager spacecraft can be seen in its encounters with Jupiter, Saturn, Uranus, and Neptune. Visual Lagrange points of the Earth and Moon can be seen, along with the galaxy and star system. The gamma-ray burst locations, found in distant galaxies, can be found. Supernovas are shown in real time.

Duncan Geere of PC Gamer UK gave it an 84/100 and spoke positively of the game, "Universe Sandbox isn't going to change your life. It isn't going to make you cry, and it won't sit in the top of your most-played list in Steam for weeks. But if you like the idea of an interactive orrery that you can rip apart and put back together in whatever way you like, and you're happy to feed it with a bit of imagination, it's hard to find a better way to spend £6." Jules of Wired said in their review, "I've seen some pretty wonderful interactive programs that allow you and your family to explore the vast regions of the universe, but nothing nearly as enthralling as Universe Sandbox. ... Unlike most astronomy software that just shows you what the sky looks like or where the planets are, Universe Sandbox is a powerful gravity simulator."