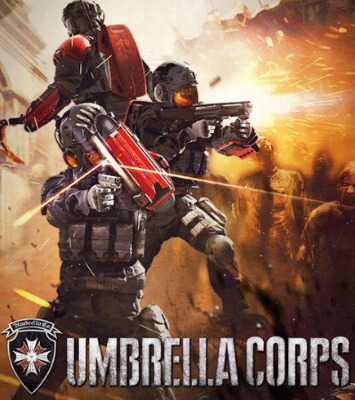 Umbrella Corps is a multiplayer-based tactical shooter developed and published by Capcom for Microsoft Windows and PlayStation 4. It is a spin-off of the Resident Evil series and was released worldwide in June 2016. The game received negative reviews from critics.

The single-player portion, "The Experiment", takes place in 2012 and 2013. It follows an agent codenamed 3A-7. The organization he belongs to, the Umbrella Co., is revealed to have the full name of the "Umbrella Corporation" in Resident Evil 7: Biohazard; a new organization using Umbrella's name. He is sent on missions by superiors in order to test out new equipment such as the Zombie Jammer. Once the testing is successful, his superiors try to kill him by sending him on more dangerous missions. The Experiment ends with 3A-7 overcoming all odds and surviving all of the missions, scaring his superiors. It is implied that 3A-7 either is the agent HUNK or is as dangerous and possesses the same level of skill. It is also strongly hinted at via voice clips that randomly play at the outcome of multiplayer matches, as well as hints from The Experiment that the Commander (a powerful, high-ranking official in Umbrella Corporation) is a clone of Albert Wesker.

The multiplayer portion takes place in 2016, three years after the events of Resident Evil 6 and 13 years after the collapse of the Umbrella Corporation in 2003/2004. Although the Umbrella Corporation has been disbanded, a great deal of valuable viral Bio-organic Weapons (BOW) research information left over from their past evil endeavours is still waiting to be discovered. The game lists 10 competing organizations using their own special forces to retrieve the old Umbrella Corporation's lost research: Suntech Samurai Co., Suntech Ninja Co., Medvedev, Sheng-Ya Pharmaceutical, Aeolus Edge East, Aeolus Edge West, Tenenti Inc., Saurian Corporation, Akembe Chemical, and Rashid-Sahir Industries. Settings that resemble locations that have been destroyed such as the Spencer Mansion and Raccoon City are explained as being recreations for training purposes.

Several corporations feverishly desire possession of Umbrella's assorted remnants and secrets - most especially those involving their bio-weapons technologies, a search that inevitably brings them into direct conflict with other corporations which are also seeking the same things. As a result, these global corporations send mercenaries into several zombie infested sites to search for Umbrella's lost secrets.

Umbrella Corps is a competitive multiplayer shooter that features zombies. Players play as a mercenary from two different corporations, and they are tasked to co-operate with their fellow mercenaries to eliminate all the hostile players. Players can choose to play from a first-person perspective, or a third-person perspective.

The game's maps are described as "compact battle zones" which have traditional historic Resident Evil themes and environments. The game features gadgets like semi-automatic rifles, shotguns, pistols, grenades and explosives, as well as unusual melee-weapons like Brainer combat axes. In order to travel between maps in an effective way, the game features repurposed climbing gear, as well as "Terrain Spikes", which can be used for traversing tough ground. There are three classes available for players to choose from; namely assault, short range, and tactical. Each class is equipped with different weapons.

In order to protect themselves against enemies, players can hide behind structures like walls. The game features a cover system called "analog cover", which highlights objects that can be hid behind with a blue color. Players can peek out from the cover to attack enemies. The more players lean out from the cover, the higher the accuracy of their weapons. In order to reduce their visibility to their competitors, they can choose to crouch and prone. However, these actions sacrifice movement speeds. The brainer combat axe can also be used to deflect attacks from enemies. Players who are killed enter a spectator mode, in which the locations of opponents are revealed to them. They are unable to combat, but they can communicate with the surviving members of the team.

The game's maps are infested with zombies. Players are equipped with a gadget called "Zombie Jammer", which makes zombies ignore their presence. However, they would still get attacked by them if they were intentionally or accidentally shot. Players can disrupt their opponent's Jammer with the use of their "Jammer Buster", which would make them visible to zombies, and therefore, forcing them to deal with more threats. Zombies can also be grabbed by players, and can be used as a shield. The game also features a progression and customization system; however, most customization items are purely cosmetic.

The game does not feature a main campaign. Instead, it features a single-player mode known as "The Experiment". It is a horde mode that has 24 missions and tasks players to fight against waves of enemies.