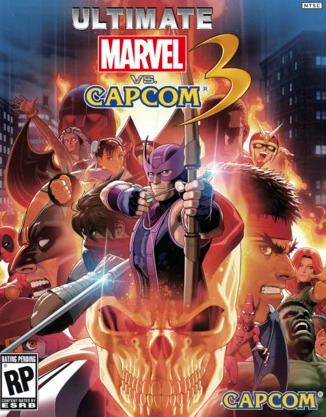 Ultimate Marvel vs. Capcom 3 is a crossover fighting game developed by Capcom in collaboration with Eighting. It is an updated version of Marvel vs. Capcom 3: Fate of Two Worlds. The game features characters from both Capcom's video game franchises and comic book series published by Marvel Comics. The game was released in November 2011 for the PlayStation 3 and Xbox 360, and was featured as a launch title for the PlayStation Vita in 2012. The game was later ported to PlayStation 4 in December 2016, and Xbox One and Microsoft Windows in March 2017.

In Ultimate Marvel vs. Capcom 3, players select a team of three characters to engage in combat and attempt to knock out their opponents. As an update, the game utilizes largely identical gameplay mechanics to the original. However, both the aerial combat and X-Factor systems, introduced in Fate of Two Worlds, have received adjustments. In addition to gameplay modifications and new playable characters, the game features several aesthetic changes.

After the events of the 2011 Tōhoku earthquake and tsunami disrupted the development schedule for downloadable content for Fate of Two Worlds, the additional content was created into a standalone title, Ultimate Marvel vs. Capcom 3, for a discounted retail price. The game received generally positive reviews upon release; critics praised the expanded character roster and improved online experience, but criticized the lack of new features and game modes. A sequel, titled Marvel vs. Capcom: Infinite, was released in September 2017.

Ultimate Marvel vs. Capcom 3 is an updated version of Marvel vs. Capcom 3: Fate of Two Worlds, an arcade-style fighting game, and changes little from the basic gameplay of the original. Players select teams of three different characters to engage in one-on-one combat. The game utilizes the same tag team-based fighting mechanics as its predecessors; players may choose to swap between their characters at any point during a match. Players must use the various attacks in their arsenal, such as character assists, special moves, and hyper combos, to exhaust their opponent's life gauge and defeat the entire enemy team, or have the most cumulative health when time runs out. While the core mechanics remain the same, a number of aesthetic changes have been made in Ultimate Marvel vs. Capcom 3, with a stronger emphasis on the comic book motif. The HUD, character selection, and stage selection screens have been redesigned. In addition, many returning characters receive balancing changes, which include new moves and animation tweaks.

Ultimate Marvel vs. Capcom 3 uses the same simplified, three-button control scheme of undefined light, medium, and heavy attacks introduced in Fate of Two Worlds. The "exchange button", used to launch opponents into the air and switch between characters while performing air combos, returns. The aerial exchange feature has been altered in Ultimate Marvel vs. Capcom 3; players can either remove meter from their opponent's Hyper Combo gauge, add meter to their own gauge, or simply deal more damage. The "X-Factor" mechanic, which grants increased damage output, speed, and health regeneration for a limited time, also reappears from Fate of Two Worlds. In Ultimate Marvel vs. Capcom 3, the attack and speed boosts for each character while using X-Factor have been adjusted. X-Factor can now be used while in the air, as opposed to the previous game, in which activation was restricted to characters on the ground.

Ultimate Marvel vs. Capcom 3 includes several game modes from the original, including Arcade Mode, where the player fights against AI-controlled opponents to reach the final boss character, Galactus; Versus Mode, where two players engage in combat; Mission Mode, which includes a series of trials for each playable character; and Training Mode. "Heroes and Heralds" is a free downloadable single-player and multiplayer team-based mode where players earn new abilities with upgrade cards, customize their characters with new powers, and compete in factions as either the heroes defending Earth or as one of Galactus' Heralds. The "ability cards", which feature various characters from the Marvel and Capcom universes, unlock special power-ups, such as invisibility and projectile invincibility, for use during mode-specific combat. Up to three different cards may be equipped at once, with more than 100 cards available to collect. A new offline mode, called "Galactus Mode", allows players to fight as Galactus against AI-controlled opponents.

An optimized netcode is present in the game, providing smoother online play compared to Fate of Two Worlds. A new spectator mode allows up to six players to watch online matches between other players. Rematch features and leaderboard functionality have also been improved to enhance the game's online experience.

Ultimate Marvel vs. Capcom 3 features the original 36 characters from Marvel vs. Capcom 3: Fate of Two Worlds and introduces 12 new playable fighters. The six new Marvel Comics characters include Doctor Strange, Ghost Rider, Hawkeye, Iron Fist, Nova, and Rocket Raccoon. The six new Capcom characters consist of Firebrand from Ghosts 'n Goblins, Frank West from Dead Rising, Nemesis T-Type from Resident Evil, Phoenix Wright from Ace Attorney, Strider Hiryu from Strider, and Vergil from Devil May Cry. Jill Valentine and Shuma-Gorath, the two characters released as downloadable content (DLC) for the previous game, remained available for download, up until all DLC content for the game was removed from online stores in December 2013; however, they are included with the PlayStation 4, Xbox One, and PC re-releases.