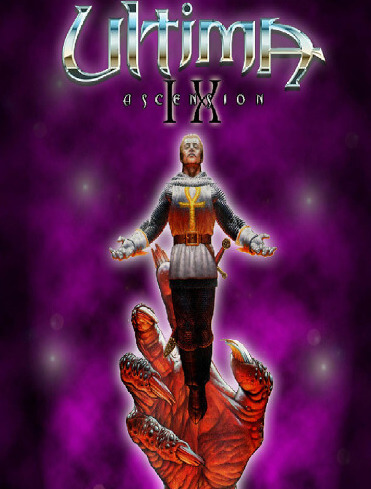 Ultima IX: Ascension is the ninth and final part of the main series of the role-playing video game series Ultima. Developed by Origin Systems and published by Electronic Arts, Ultima IX was released in 1999 for Microsoft Windows after years in development hell. Following the Avatar's escape from Pagan, he is transported back to Britannia for one final battle with the Guardian, who is increasingly ruining the physical and moral fabric of that land by use of eight columns. The Avatar must fight his way to the runes of virtue found in each of the columns, and cleanse them in the shrines of Virtue, then face off against the Guardian himself.

A difference from previous Ultima games is that in Ultima IX the player has less control of what path to take in the game. Most areas of Britannia are blocked off until specific tasks are completed, reducing the amount of initial exploration available to the player.

The game world is rendered in a detailed and seamless manner, but Britannia is much smaller in overall area than previous games. For example, Britain, the largest city of Britannia, consists of only a few buildings.

In the beginning of Ultima IX, the Avatar had somehow returned to Earth for an unspecified amount of time before getting back to Britannia. The game starts just after the end of Ultima VIII, in which the Avatar is transported to a Guardian-controlled Britannia. He arrives in Britannia on a mountain overlooking the Guardian's keep in Terfin. The Avatar is transported to Stonegate by Hawkwind the Seer (from Ultima IV), who informs him that great columns have appeared throughout the land, and their malignant influence has caused plagues, famine, and other natural disasters. Under their power, the people of Britannia have twisted the Virtues into mockeries of their true meaning. The Guardian is helped by Lord Blackthorn, who leads the Wyrmguards and forces the people to obey the Guardian.

As the quest progresses, the Avatar learns that the Guardian has stolen the Runes of the Virtues and twisted them into the glyphs that form the heart of each of the columns. Most of the game consists of traveling through the dungeons to recover the glyphs and visiting the Shrines of the Virtues to meditate and cleanse them. Eventually, it is revealed that the Guardian is nothing other than the dark half of the Avatar himself, and the only way to save Britannia is for the Avatar to ascend to a higher plane, taking the Guardian with him. The player is able to accomplish this via an Armageddon spell cast behind a Barrier of Life, which takes the Avatar and the Guardian to a higher plane out of Britannia.

Origin Systems released a number of preview video clips in the five years between the original release of Ultima VIII and the final release of Ultima IX in December 1999, first in the Ultima Collection and intermittently in between. These screenshots and clips pointed to a totally different plot from the released version, which many longtime fans of the Ultima saga agreed was unsatisfying and unrewarding.

On December 9, 1999, a synopsis of the original script was posted to the "Ultima Horizons" discussion board. The synopsis was written by Bob White and released with his permission. White worked directly with Garriott, John Watson, and Brian Martin in developing the game's original story before leaving Origin.

The beginning of the game is more or less the same as the beginning of the actual Ultima IX release, except that the Avatar never actually returns to Earth after his sojourn in Pagan in Ultima VIII. Just as in the official plot, there are also columns created by the Guardian with malignant influence. Further, Lord British has become enfeebled and left government of the kingdom in the hands of a tribunal consisting of the lords of the cities of Moonglow, Britain, and Jhelom, but they have proved unable to deal with the crises and have fractured into mutually distrustful city-states that are, at the time the Avatar arrives, at the brink of war.

The Guardian is behind all of this, orchestrating these events with the aid of Lord Blackthorn, but few within the kingdom suspect this. Among those suspicious is Samhayne, a benevolent smuggler of contraband and food supplies to the various cities. He enlists the aid of the Avatar to find proof of these shadowy manipulations that are causing Britannia to disintegrate. With the help of his longtime friends Shamino and Iolo and Samhayne's protégé Raven, they uncover that Lord Blackthorn is secretly advising members of the council and goading them to war. Blackthorn is unmasked just as the armies of the council have taken the field of battle. He is eventually caught later on at Terfin, and executed at Lord British's command, but the Guardian escapes.

The Avatar and Lord British then travel to Stonegate for the final confrontation with the Guardian, but after it appears that they had successfully killed him, they are told that it is not enough. The columns that the Guardian created have embedded themselves too deeply within the very fabric of Britannia itself, and soon they will destroy the world, funnelling the power of its destruction back into the Guardian, resurrecting him and making him even stronger. The only way to destroy the Guardian is to extinguish the life force of Britannia itself, but the people may be saved by evacuating them to the island of Skara Brae and using the power of the Runes of Virtue to protect them. The Spell of Armageddon is cast, Britannia is destroyed, along with the Guardian and Lord British, but the Avatar ascends to a higher plane of existence by the power of the spell. The people that were evacuated to Skara Brae are protected by the Runes and they live on, to find another world to call their own.

This plot specifically compares the destruction of Britannia and the island of Skara Brae flying off into space with the Roger Dean paintings from the album Yessongs.