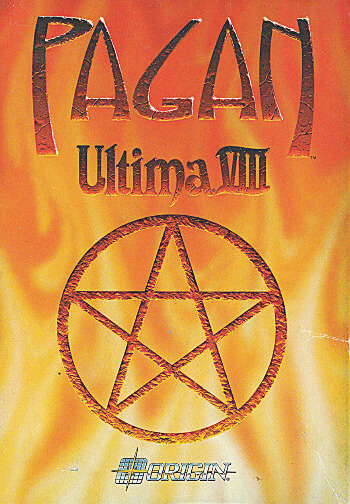 Ultima VIII: Pagan is a video game, the eighth part of the role-playing video game series Ultima. It was not as well-received as its predecessors, Ultima VII and Ultima VII Part Two: Serpent Isle. Developed in 1994, it is a DOS-only title and is also the first game in the series to be rated M in North America.

It was re-released in 2012 on GOG.com with support for Windows and macOS via DOSBox.

Following the defeat of the charismatic religious leader Batlin on Serpent Isle, the Guardian banishes the Avatar to a world that he has already conquered: Pagan. Ultima VIII has a much darker tone and a very different premise, in comparison to most of the Ultima games. The world of Pagan is entirely different from that of Britannia: the Virtues are not part of Pagan's culture, and the magic systems and monsters are entirely different.

The world of Pagan is in eternal twilight as the result of an ancient battle between the Elemental Titans and the evil "Destroyer", which resulted in the victory of the Titans. However, the people of Pagan had to pay a high price: the Titans had to henceforth be worshiped as gods. The Titans bestow powers on their most ardent followers, but they are otherwise cruel and unloving rulers, and their followers terrorize the general population.

Ultima VIII sets off where Ultima VII Part Two: Serpent Isle ended: The Guardian has grasped the Avatar from the Void, and now drops him into the sea of the world Pagan through a pentagram-shaped portal. In the introduction, the Guardian reveals his plot: "You have been a thorn in my side for far too long, Avatar. Your two worlds will be crushed. Britannia first, then Earth. I shall parade you before their conquered peoples as the fallen idol of a pathetic ideal. I banish you to the world of Pagan. No one here knows of the Avatar!"

The Avatar regains consciousness on the shore after being rescued from the sea by a fisherman (who turns out to be an important character later on in the plot). He soon witnesses the execution by beheading of a townsman, ordered by the tyrannic ruler of the region, Lady Mordea.

Later, visiting the wizard Mythran, he learns that there are four Titans on Pagan, each one having one of the Elements as his/her domain: Water (Hydros), Air (Stratos), Fire (Pyros) and Earth (Lithos). The more privileged followers of Lithos are identified as necromancers, the wizards that trap Pyros and tap him for their power as sorcerers, the followers of Stratos as theurgists and the (albeit highly selective) followers of Hydros as tempests. Apart from those, a fifth type of magic known as Thaumaturgy exists and is pioneered by Mythran. In order to escape Pagan, the Avatar has to overcome many obstacles and master the ways of all titans, finally becoming the Titan of Ether: the magical field and fifth element.

During his quests, the Avatar collects the four artifacts of the Titans, unleashing violent thunderstorms, hurricanes, earthquakes and meteor showers by doing so. These artifacts allow him to enter the Ethereal Plane and defeat the Titans on their own turf. The Avatar then reconstructs the original blackrock gate that originally allowed the Guardian to enter Pagan. By entering the reconstructed gate, the Avatar is teleported back to Britannia, which is now ruled by the Guardian, who is revealed to also be the "Destroyer".

Computer Gaming World said in June 1994 that "Though the imagery is gorgeous ... the Avatar's interaction with the world more resembles Prince of Persia" than previous Ultimas, the world was smaller, and the game lacked companions or traveling to other towns. The magazine predicted that action fans "will be pleasantly surprised ... but traditional RPGers and long-time Avatars" might not. Scorpia was much harsher in the next issue. Her review began by calling Pagan "the purported Ultima VIII", stating that "If you were expecting characterization, rich story, role playing—you're expecting it from the wrong game". She continued, "There are, in fact, so many things wrong with Pagan that it's much easier to start with" improvements, including not using the Voodoo DOS extender, the absence of bugs, better inventory management, faster saving and loading save states, and the lack of the "idiot parade" of NPC party members with poor AI. Describing the game as "'Mario: The Avatar", Scorpia suggested that Origin implemented the "ludicrous arcade action" for a console port, but added that because of poor movement and combat controls, "judging angles and distances is very tricky ... I have never, in any other CRPG, saved and restored as much as in this one". She complained that the Avatar trying to join a magic organization was "a good 75% of" the game, but "a nightmare of multiple" systems made magic "a chore". Scorpia reported that "For the first time ever in any CRPG I felt no identification whatsoever with the character", describing the Avatar's actions as selfishly ruining a world which had been destroyed but was stable before his arrival: "the very term 'Avatar' has degenerated into being only a trademark of Origin systems; it has lost all meaning insofar as the game and the spirit of Ultima is concerned". She concluded that "Pagan is a disaster, and an embarrassment to Origin, Lord British, and Ultima fans everywhere", and that she was not looking forward to a sequel. Scorpia used her hint column that month to "for the first time ever" give "not hints, but explicit directions on getting through some of the tougher parts of Pagan" so players could "move on to better things".

Reviewing the game for PC Gamer US, Trent C. Ward wrote, "With its rich plot, superb animation, and great sound, Ultima VIII is one of the better action titles out there." However, he concluded that its "really strange mix of game play ... doesn't quite pay off." David McCandless of PC Zone argued that "Pagan is a game you will either love or hate." He summarized, "If you get into it, it will last you weeks and you'll think it's brill and you'll love it and you'll play it and play it. But personally, I don't think it's much good." PC Format's Richard Longhurst praised its "incredible depth and detail", and called it an "immense and intense" game that was "beautifully animated". Dragon gave the game 3 out of 5 stars.

In 1996, Computer Gaming World ranked it as the 20th worst game of all time, stating "A once-great RPG series reduced to the level of Mario, but with hateful, virtue-less characters." Ultima VIII was named the 60th best computer game ever by PC Gamer UK in 1997, the highest position of any game in the mainline Ultima series. The editors wrote, "Even newcomers to RPGs will be able to cope with it, but it's not for the faint hearted."