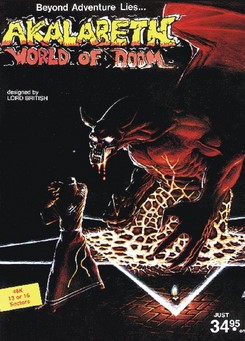 Akalabeth: World of Doom (/əˈkæləbɛθ/) is a role-playing video game that had a limited release in 1979 and was then published by California Pacific Computer Company for the Apple II in 1980. Richard Garriott designed the game as a hobbyist project, which is now recognized as one of the earliest known examples of a role-playing video game and as a predecessor of the Ultima series of games that started Garriott's career.

The game was made by teenager Richard Garriott in Applesoft BASIC for the Apple II while attending high school in the Houston, Texas suburbs. Begun first as a school project during his junior year using the school's mainframe system and Apple II computer, as well as another Apple II bought for him by his father, the game continually evolved over several years under the working title D&D with the help of his friends and regular Dungeons & Dragons partners who acted as play-testers. Development of the game began soon after his initial encounter with Apple computers in the summer of 1979, but Garriott did not expect that the public would see his work.

When the game reached version D&D28b later that year (where "28b" refers to the revision), he demoed the game – now renamed to Akalabeth – for his boss at a Clear Lake City, Texas-area ComputerLand, who suggested he sell the game in the store. Garriott consented and spent $200 to package and sell the game for $20 inside Ziploc bags, with photocopied instructions and a cover drawn by his mother. It warned "BEWARE FOOLISH MORTAL, YOU TRESPASS IN AKALABETH, WORLD OF DOOM!!", and claimed to offer "10 different Hi-Res Monsters combined with perfect perspective and infinite dungeon levels". California Pacific Computer Company received a copy, and contacted Garriott to publish the game. Garriott flew to California with his parents and agreed to receive $5 for each copy sold. The retail price of the California Pacific version, with cover artwork by Denis Loubet, was $35; Garriot claims that the game sold 30,000 copies, with him receiving $150,000, and that Akalabeth had the best return on investment, with later games "all downhill from there". The company suggested that for marketing purposes "Lord British" be credited as the author, and organized a contest for Softalk readers to figure out his true identity.

In creating Akalabeth, Garriott was primarily inspired by Dungeons & Dragons, for which he held weekly sessions in his parents' house while in high school, and the works of J. R. R. Tolkien, which he received from an in-law of his brother. The name derives from Tolkien's Akallabêth, part of The Silmarillion, though the game is not based on Tolkien's story. In the original game, the last monster on the need-to-kill list is called "Balrog", like the demonic monsters from The Lord of the Rings, and unlike the later name for the monster in the Ultima games, Balron.

While not explicitly stated, Akalabeth is seen as the first game of the Ultima series, a very popular and influential series of role-playing video games. It was, therefore, included as part of the 1998 Ultima Collection where it officially picked up the nickname Ultima 0. The version in the Collection added CGA colors and MIDI. It ran on DOS, making it the first official port of the game to any system other than the Apple II, though an unofficial, fan-made PC version had circulated on the Internet since late 1995.

Copies of the original Akalabeth are much more rare than those of other games that sold fewer than 30,000 copies. Jimmy Maher from the Digital Antiquarian homepage believes that Garriott is mistaken on the figure, as the game only appeared near the bottom of the Softalk's monthly list of the top 30 best-selling Apple II programs twice before being discontinued in 1982; by contrast Sierra On-Line's The Wizard and the Princess, which often appeared near the top of the list, sold 25,000 copies by mid-1982. Given California Pacific's high royalty rates he suggests that 10,000 copies might have been enough for Garriott to earn $150,000.