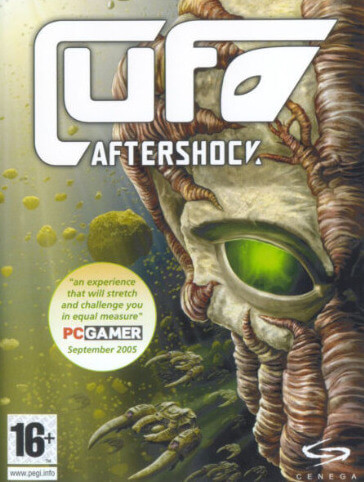 UFO: Aftershock is a computer real-time tactical strategy game created by Altar and released in 2005. It is a squad combat game at its core with overlying strategic elements and a clear debt to the lauded classic X-COM: UFO Defense (1994), though a smaller one than that of its predecessor, UFO: Aftermath. An Xbox version was planned for release in Europe but cancelled.

The combat section of the game uses a real-time system with adjustable speed along with a pause option, and it has been improved from the previous game, with added features such as multilevel battlefields and accessible buildings, but also lacks some previous features, such as destructible terrain. The strategic section holds resource and squad management, research, development, some limited diplomacy and planning of attacks. As a departure from both the X-COM series and the prequel, there is no air-to-air interception.

Aftershock is set in a post-apocalyptic 2050, after the events of UFO: Aftermath. The game assumes that the player took up the Reticulans offer of resettling the most able of humanity in a space station, while allowing the rest to die, consumed by the Biomass that the Reticulans could not control (However, in the first game the player could reject their offer, and save the Earth while defending against both the Reticulans and the Biomass). Having lost contact with the Earth, the player must find out what happened.

Aftershock was released to PAL regions on 21 October 2005 and to North America on 23 November 2005. The game received mixed critical reviews upon release and is notoriously buggy even after several released patches. A sequel and third game in the series was released two years after Aftershock titled, UFO: Afterlight, to execute the same concept on Mars. UFO: Aftershock is protected by the controversial StarForce copy protection software on all store sold copies of the game. The game was re-released by GOG.com, a digital distribution video game retailer, without any copy protection.

The publisher granted a license to the Czech company Redboss Games, a subsidiary of Redboss, which they used to create a mobile version of UFO: Aftershock.