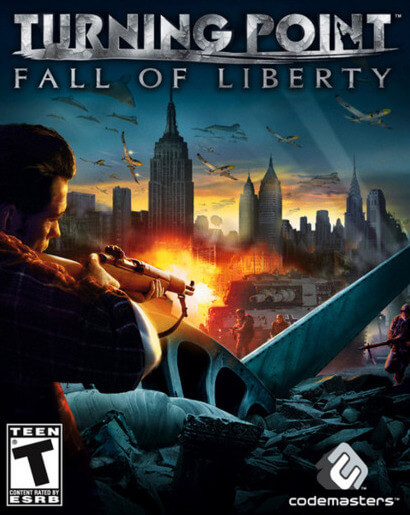 Turning Point: Fall of Liberty is a first-person shooter video game, developed by Spark Unlimited and published by Codemasters for the PlayStation 3, Xbox 360 and Microsoft Windows. It was released in North America on February 26, 2008; in Europe on March 14, 2008; and in Australia on March 21, 2008.

The game takes place in an alternate history in which Winston Churchill dies in 1931, eight years before the start of World War II, presenting the possibility of what could have happened to Europe, the United States, and the rest of the world without his leadership; the United Kingdom is subdued by Nazi Germany in 1940, and the rest of Europe, North Africa and the Middle East fall soon afterward. The United States, infected with anti-war sentiment, does not get involved overseas. The game takes place in the midst of the Greater German Reich's invasion and occupation of the East Coast of the United States in 1953.

In Turning Point: Fall of Liberty, the player assumes the role of Dan Carson, an average New York construction worker who has no prior connection to the military. Unlike other similar war games, the player's objective is not to help the Allies win the war, but merely to survive in an environment of total war as a resistance fighter against Nazi Germany.

The game includes many advanced versions of weapons used in World War II, and several that were being researched and developed late in the war but never made it to mass production. Super-heavy tanks such as the E-100 and Landkreuzer P. 1000 Ratte appear in the game, as well as the Nachteule troop-transport zeppelin, the Flugzeugträger German aircraft carrier Graf Zeppelin, and various advanced jet fighters and bombers, all of which are utilized by the German invasion force.

The player can wield up to two weapons, which can be German or American. Weapons range from submachine guns to rifles to rocket launchers. He can also wield up to four grenades. When the player gets close to a Nazi soldier, a prompt comes up. Pressing the melee button when the prompt is seen allows two options to be taken. One is an instant kill, where Carson melees the Nazi soldier to death. The other is the human shield, where Carson knocks the Nazi soldier out, holds him in a stranglehold, and takes his sidearm. He can walk around killing other Nazi soldiers with the human shield protecting him against most damage until his human shield dies. Occasionally, a Nazi soldier will be standing near an interactive object, such as a furnace or a toilet, allowing Carson to perform an environmental kill with it.

Multiplayer in Turning Point: Fall of Liberty is available online via Xbox Live, PlayStation Network or through a System Link although there are currently no servers available for Xbox live. Gameplay is divided into two modes: deathmatch and team deathmatch with players able to play as Nazi soldiers or as the American Resistance. The players can pick their primary weapon (a pistol serves as the secondary weapon). Gameplay is centered on four maps based on locations within the game and each map also has its own player limit with eight as the maximum.

Turning Point: Fall of Liberty is based on an alternate history by Stephen R. Pastore where the point of divergence occurs with Winston Churchill's death in 1931 from being hit by a cab while visiting New York City, instead of surviving. Nine years later, without his foresight and leadership, the United Kingdom falls to the Third Reich in 1940 after the British Royal Air Force was defeated by the German Luftwaffe, achieving air supremacy, and Operation Sea Lion was launched, forcing Prime Minister Neville Chamberlain to surrender to Nazi Germany. This allows Germany to sweep through the other surrounding countries virtually unopposed. The Third Reich invades the Soviet Union with Operation Barbarossa unhampered, and conquers large amounts of territory and many Russian cities, including Stalingrad, Leningrad, and Moscow. After numerous German victories decimate the disorganized Russians, the Red Army and Joseph Stalin surrender to the Wehrmacht and Adolf Hitler. The non-aggression pact Stalin made with Germany prior to the invasion left him without any allies to back him up. The Nazis also help their Italian allies conquer North Africa, creating Benito Mussolini's "New Roman Empire". Japan sweeps through Eastern Asia unopposed using Germany's captured Middle Eastern and Soviet oil, which makes any U.S. oil embargo against Japan useless. Various resistance groups form in occupied Europe against the oppressive regime. They are unable to do much against the Nazis, and many are crushed. Even peaceful demonstrations against Nazi occupation are met with fierce hostility. During the war, the United States chose an isolationist policy, implemented by Republican president Thomas E. Dewey (who, in this history, defeated Harry S. Truman in 1948).

A period of development follows the success of the Axis Powers, transforming conquered Europe, Asia and Africa into the Greater German Reich and allowing allies Japan and Italy to share in the prosperity; at the same time, the Nazis start engineering and mass-producing many of their Wunderwaffen, including jet fighters, super-heavy tanks, and high-tech bombers. This advanced technology makes Germany the strongest nation on the planet. With the war essentially over, the people of the world wonder why the weapons are being developed, and what is the purpose of the build-up. This causes rising tensions between the now technologically superior German Reich and the United States, one of the few nations that is still free from Nazi rule. The United States and the rest of the League of Nations continue to condemn the actions of Nazi Germany in the occupied territories, but make no attempts to stop them, as the U.S. is still dominated by anti-war sentiment.

When secret plans for an American invasion by German and Japanese forces are found by the British Resistance, codenamed Operation Humpback Whale, Germany and Japan are quick to deny it, saying these accusations are ludicrous. President Dewey believes their lies, and continues his isolationist policies, refusing to stock up on arms and increase the size of the military in case of a possible invasion. The invasion plans turn out to be true, however, and Operation Humpback Whale is launched in 1953, with a combined German/Japanese offensive striking at the United States on both the Atlantic and Pacific coasts.