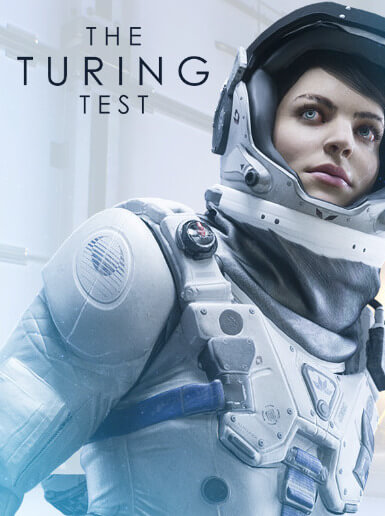 The Turing Test is a first-person puzzle video game developed by Bulkhead Interactive and published by Square Enix. The game was released for Microsoft Windows and Xbox One in August 2016, while a PlayStation 4 version was released in January 2017.

The Turing Test is a puzzle video game with gameplay experienced from a first-person perspective. The player assumes the role of Ava Turing, an International Space Agency (ISA) engineer working at a research station located on Europa, one of Jupiter's moons.

The puzzles involve distributing power through a special tool that can collect and fire power spheres into special receptacles to unlock doors or activate other machinery in the game. As the player progresses, additional elements are introduced, including the ability to observe scenes and activate certain objects via the station's monitoring cameras, and control mobile robots that can be used to explore levels.

In the far future, engineer Ava Turing is one of several members of a research team sent via the International Space Agency (ISA) to excavate Jupiter's moon Europa. While Ava remains in cryogenic slumber, the other team members are woken and travel to the moon to set up their base and begin conducting their studies, with Ava scheduled to wake once the base is completed. Sometime later, Ava is awoken by the Technical Operations Machine (T.O.M.), an artificial intelligence that monitors the project. T.O.M. tells Ava that her crewmates are in danger and she needs to go down there to help them out. She quickly sets out in a lander and enters the base on Europa. T.O.M. quickly recognizes that the base's internal configuration has changed from their records, whereby to progress further into the complex, Ava must complete various tests (designed as the puzzles in game).

As Ava gets deeper in the complex, T.O.M. determines some of the team members are already dead and the others need their help, urging Ava to move faster. As the tests get harder, T.O.M. realizes that these are designed to be solved by a combination of human and artificial intelligence, a manner similar to that of the actual Turing test.

They enter an area where one of the remaining crew-members, Sarah, warns Ava over the communication systems that she is actually being controlled by T.O.M. due to a special chip implanted in her hand when they left for the mission. Sarah directs Ava to a Faraday cage, which temporarily frees Ava of the control from T.O.M., revealing in the process that the player has not been playing as Ava, but as T.O.M., who has been controlling Ava. However, T.O.M. manages to convince Ava that the two of them need to continue to work together to save their colleagues. Though angered by the intrusion of T.O.M. into her body, Ava continues onward, allowing T.O.M. to reassert control over her body.

T.O.M. eventually reveals that the Europa ground team had found a microorganism within the depths of the moon that could be used to infinitely regenerate DNA; this could potentially make humans immortal, but also infinitely regenerate bacteria and viruses. When ISA learned of this discovery, they ordered T.O.M. to take whatever actions needed to make sure the Europa team could never return to Earth, initially by taking actions such as trying to starve them to death or lock them outside the base, but eventually by using the hand chip implants to control them. The surface crew realized they were being controlled, and those that did not die from T.O.M.'s actions found a way to rid the chip from their body, including in one case severing their entire arm. With no way to control the Europa crew, ISA ordered T.O.M. to wake Ava and send her to prevent the others from returning.

Eventually completing the last of the tests set up by the surface crew, Ava finds Sarah in person, and she offers to remove the hand chip from Ava; Ava agrees. The two realize the only way to get off Europa is to stop T.O.M. and they begin to disable his databases. T.O.M. is now no longer able to control Ava, but he retains control over his sentry weapons, which he can either use to kill Sarah and Ava, ensuring that the organism will never leave Europa, or do nothing, eventually leading to the end of T.O.M. and allowing Ava and Sarah to escape.