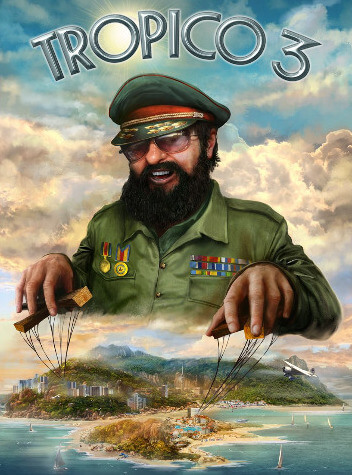 Tropico 3 is a video game developed by Haemimont Games and published by Kalypso Media. Like the previous games in the series, Tropico 3 is a construction and management simulation as well as a political simulation game, with emphasis on city building. As a thematic sequel to Tropico (unlike the pirate-themed sequel, Tropico 2), the game attempts to return to the roots of the series, which puts the player into the shoes of "El Presidente" – a ruler governing over an island banana republic.

The OS X version of the game was released on January 26, 2012, by Feral Interactive.

Feral Interactive released a redesigned version of Tropico 3 to iPad on December 18, 2018, under the name Tropico, with an iPhone version following on April 30th, 2019. An Android version of the game was released on September 5th, 2019.

Players begin having seized power of the Caribbean island country of Tropico, where they rule as "El Presidente". The game has a campaign with 15 different missions with varying objectives.

As "El Presidente", the player's main duties include managing development on the island, by ordering construction of various resources, industry and service buildings, and determining how these buildings operate. The player can also issue several different "edicts" to influence the island, such as new laws, policies, and diplomatic actions.

There are seven different political factions on the island (communists, capitalists, militarists, environmentalists, nationalists, religious faction and intellectuals) each with various demands, such as constructing a specific building and issuing a specific edict. Due to the game's Cold War setting, the player will have to manage relations with both the United States and the USSR, who will provide the player with yearly financial aid. Higher relations with a superpower will mean more aid and the possibility of an alliance, low relations will mean less aid and the danger of invasion by that superpower.

Other features include a time line editor that allows you to create your own fictitious historical events or enter real ones, custom avatar, political speeches, wide range of editing and modification functions, mission generator for random map creation, variety of online-functions such as high scores or visiting islands belonging to other players and a Latin soundtrack.

A transport system allowing citizens to travel by cars.

Oil production is available as an industry for educated workers.

Same-sex marriages and nuclear testing are available as edicts, with different results and requirements.

Ability to construct a sculpture of El Presidente (the player's avatar) on the island.

Tropico 3 was developed by Haemimont Games for both Xbox 360 and PC. Features include a new 3D game engine and a customizable avatar which you can travel across the island, interacting with the environment and population and the use of cars, trucks and limos. Like the original Tropico, the developers preserved the tongue-in-cheek humor of the game, as well as the basic game-play. In Tropico 3, the issues and problems of the island are explained by Juanito the DJ in humorous ways.

Tropico 3 received generally favorable reviews at Metacritic, with an average of 79/100 on the PC, and 75/100 on the Xbox 360. GameSpot commented that "playing a banana republic dictator in Tropico 3 might not be easy, but it certainly is rewarding." GameZone's Dakota Grabowski gave the game a 7 out of 10, stating, "Containing a 15-mission campaign, short tutorial, sandbox mode and special challenges, Tropico 3 has enough replay value to keep players at bay for more than a month. If that doesn’t satisfy the hunger, players are eligible to jump online and download user-created challenges to overcome. With personalities such as Fidel Castro and Che Guevara, Tropico 3 is an educational and entertainment piece that is well-deserving of a few playthroughs by all gamers."