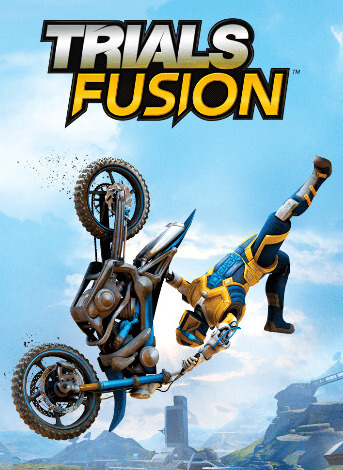 Trials Fusion is a platform racing video game developed by RedLynx in collaboration with Ubisoft Shanghai and Ubisoft Kiev. A follow-up to Trials Evolution, it is the fifth game in the Trials series and is the first one to be released on a PlayStation platform. The game was released on Microsoft Windows, PlayStation 4, Xbox 360 and Xbox One in April 2014. A companion game, Trials Frontier, released on iOS and Android devices and is designed to accompany the console and PC title. Ubisoft released six paid DLC packs, as well as several free content updates. Online multiplayer was added in an update on January 24, 2015.

Trials Fusion was generally well received upon release. Critics praised the level design, controls, graphics, the futuristic setting, and the amount of content, but criticized the lack of tutorials for the game's create mode, and its similarity to past Trials games. By February 2015, the game had sold over 1.7 million copies.

Like previous games in the series, Trials Fusion presents an arcade take on the real-life sport of observed trials. The player controls a rider on a physics-based motorcycle from the start of the level to the end while navigating a number of obstacles. The game uses 3D graphics, but is played on a 2D plane, so the rider can only move forwards and backwards. The player controls how the rider shifts their weight forward and backward in order to perform wheelies and stoppies as well as flips while in the air and controlling how the bike lands. Trials Fusion, like the other games in the series, is known for, among other things, its notorious difficulty, particularly towards the end of the game. Unlike in previous Trials games, players can also perform freestyle motorcross stunts while in the air by moving the right analog stick. Also new to the Trials series is the ability to choose a quad bike for a handful of levels: the 'TKO Panda'. Other vehicles included are motorbikes 'Baggie', 'Roach', 'Pit Viper', and 'Foxbat', minibike 'Donkey', and BMX bike, 'Rabbit'.

Trials Fusion also features a track editor, allowing players to create their own courses and games.

Trials Fusion's multiplayer allows up to 8 players (PS4, Xbox One and PC) to race in different tracks, while the Xbox 360 version of the game only support 4 players. Online multiplayer was added in an update on January 24, 2015.

The game is set in the year 2042, after an object "fell from the sky and changed our world", and after the creation of the "Anomaly AI". Descended from this AI are two characters, SynDI and George whose disembodied voices are heard by the player's character, Rider, throughout the game. Also in the events leading up to the game, the UN has designated some parts of the planet as "United Nations Ungoverned Regions".

Like its predecessor Trials Evolution, Trials Fusion has secrets hidden within the game. No hidden or cryptic messages hide within the levels, however, in the Track Editor, a hill contains a key titled, "The Fifth Key". This could possibly be a reference to Evolution.

Game Informer's Matt Miller gave the game a positive score of 8 out of 10 in his review. He stated: "Trials Fusion, like its predecessors, is a bundle of fun packaged in frustration, repetition, and memorization. If that kind of punishment is your cup of tea, Fusion offers more of what you’ve come to expect. The existing formula is an awfully good one, but with few meaningful steps forward, it’s easy to feel like we’ve crashed down this road before." Lucas Sullivan from GamesRadar awarded the game a 4 out of 5. He spoke positively of the game's replayability, addictiveness, and physics, but disliked the FMX tricks, story, and certain level designs.

GameSpot's Tom Mc Shea also gave the game an 8/10; in his review, Mc Shea praised the course design, calling it "clever" and "imaginative", the motocross style tricks, the rewards system, the track editor, which he called "powerful", and the optional objectives. He did however heavily criticize the game's create mode for having poor tutorials; he called the creation tools the "one downside" of the game and said that "without a proper tutorial, he couldn't wrap his head around the obtuse tools".

Vince Ingenito of IGN gave the game an 8.2 out of 10 in his review. He said: "Trials Fusion’s precision controls and exacting challenge make it a great pickup for leaderboard perfectionists."

Polygon's Russ Frushtick was more critical of the game in giving it a 6.5/10. Frushtick said in his review that "Every aspect of Fusion feels like a less imaginative experience that coasts rather than strives for something better. There's no question that the core Trials gameplay within Trials Fusion remains fun. But the host of missing features and bad design choices make it a significant step backwards after Evolution and for the franchise."