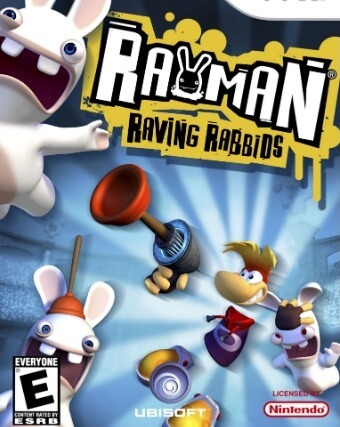 Rayman Raving Rabbids is a party video game developed and published by Ubisoft. The game is a spinoff in the Rayman series, and was released in November 2006. The game consists of 75 minigames. The game was released for the Wii, PlayStation 2, Microsoft Windows, and Xbox 360 systems, with a different version released for Game Boy Advance, Nintendo DS and mobile phones. A PlayStation Portable version was planned, but was later cancelled.

The game later spawned a subseries, with the first sequel, Rayman Raving Rabbids 2, being released in November 2007. As of April 2014, the series had sold over 14 million units worldwide.

The game features two different modes of play - 'Story mode' and 'Score mode'. In story mode the game follows fifteen days of Rayman's imprisonment by the Rabbids. Each day, Rayman must complete at least three trials, followed by one special “boss trial”, such as a first-person rail shooter using plungers, or a racing game in which the player controls a warthog and uses a flyswatter as a riding crop. Completing trials earns Rayman various costumes and matching music, including Gangsta, Raymaninho (a portmanteau of the title character's name and football star Ronaldinho), Disco, Gothic, Caramba, Rock'n'Roll, Granny, DeeJay, and Bunny. Trial completion also earns plungers and after accumulating enough, Rayman builds a ladder up the edge of his jail cell and escapes to freedom. In Score mode, the player can repeat past trials in an attempt to improve their score or can play the game as a multiplayer party game.

Minigames fall into one of four categories: Bunny Hunt, Sports, Challenges, and 'Shake your Booty!' dancing. Bunny Hunt comprises first-person rail shooter stages, all appearing in Story Mode as "boss" stages that the player may play for Score, Time, or Survival with the goal of obtaining the highest score possible with only one life. Two players can participate in Co-op Bunny Hunt, but Survival is not available for multiplayer. The Sports minigames can be played for Workout, which requires rapid movement of the Wii Remote, and Precision, which involves the controls of the remote.

Sports minigames also include 'Get Going!' racing stages, including four warthog racing games and a skydiving race. Challenges are various games found in Score Mode which must be played one after the other with the goal of a high combined score in a Triathlon, Pentathlon, or Decathlon. The 'Shake your Booty!' category involves dance-themed minigames and are found in Story Mode each day. Also, there are "Skill" minigames that do not fall under any of the other categories. Variations of the mini-games are featured in the DS version. Games such as "Feed the bunnies", "Ghost hunt", "Bunny invasion", "Stop the mines" and "Super Rabbid" are used. The stylus is used for all of the minigames, unlike the rest of the gameplay.

The Game Boy Advance and Nintendo DS versions of the game are, unlike their console counterparts, traditional platformers. In the Game Boy Advance version, the costumes that Rayman acquires give him special abilities, such as using the Granny outfit to sneak past cameras, or the DeeJay outfit to break open vents. The Nintendo DS version allows players to use the stylus to perform certain actions, such as controlling wind or setting rabbits on fire.

The Rabbids are the common enemy in this game. Their technology varies from advanced giant robots to close combat tools such as plungers and feather dusters. Characters do not have the voice acting that was first used in Rayman 2: The Great Escape. Instead, the voices become regular gibberish, except for a few words like "Hey" and "Wow", or "Daaaaaaaaaaaaaaah!" (in "Rayman Raving Rabbids Making of" they said "Action"). Besides the Rabbids, there are also warthogs, seen in the game's warthog races, and various other animals (such as sheep, cows and pigs). One of the minigames actually requires the player to point the members of the same species out.

The game begins with a cut-scene showing Rayman having a picnic with the local Globox kids. Their picnic is interrupted when an earthquake erupts and the Globox kids sink into the ground while 3 Rabbids appear in their place. Their commander Sergueï kidnaps Rayman and throws him in an arena with angry Rabbids, several of whom are armed. Rayman must complete his first trials now, and afterwards Sergueï takes him to his cell and gives him a plunger. Initially the Rabbids jeer him, but as Rayman completes more trials, they grow bored, and eventually he even becomes popular among the Rabbids and they cheer him on, in addition to making his jail cell more hospitable. Eventually, Rayman amasses a collection of plungers as rewards for completing the trials. By building a ladder out of all his plungers to reach the window (and settling with an annoying bird who keeps defecating on him), Rayman manages to escape and free himself. Once liberated, he remembers the Globox kids and attempts to return through one of the Rabbid holes to rescue them, but winds up getting stuck in the hole. In a post-credits scene, Rayman is still stuck in the hole through the night, and sheep come to eat the leftovers of his picnic.

The game has received positive reviews. IGN and GameSpot complimented the game's "sick sense of humor" and a heavy emphasis on fun, as well as the design of the bunnies and the game in general. Reviews highlighted the story, music and sound, and said that gameplay is addictive and optimized for the Wii. A few critics claimed that other developers of Wii launch titles had simply ported their games and "tacked on" Wii controls. It is currently one of the highest-selling third party games for the Wii. The game was subsequently released on other platforms, including the PC, PS2, and Xbox 360. Reviewers in general found these versions to play at an inferior level to the Wii version due to the game's controls having been optimized with the Wii in mind.

Several shortcomings were cited. Some of the minigames were described as "duds", being unenjoyable or broken; the game could not run in progressive scan mode; and not all of the trials had multiplayer opportunities, "reducing the game's potential as a party game." Nintendo Power stated that a lot of promised features had been cut out. The Wiire awarded this game with Family Friendly, Ease of Use, and Multiplayer Mayhem awards.