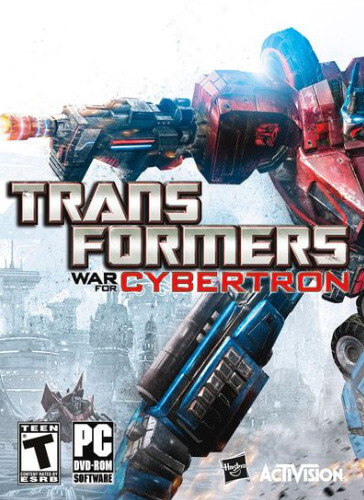 Transformers: War for Cybertron is a third-person shooter video game developed by High Moon Studios and published by Activision. It was released for Xbox 360, PlayStation 3, and Microsoft Windows in June 2010. Two portable versions were released for the Nintendo DS, one featuring an Autobot campaign, the other a Decepticon campaign. A game for the Wii, Transformers: Cybertron Adventures, was developed by Next Level Games and utilizes the same characters and setting as War for Cybertron.

The game takes place on the planet Cybertron, prior to the Transformers arrival on Earth. The Autobots and Decepticons are engaged in a civil war. The game can be played starting from either faction's perspective, but begins chronologically with the Decepticon campaign. The game revolves around the use of a substance known as Dark Energon, which the evil Decepticon leader Megatron believes will allow him to return the planet to what he refers to as a golden age.

War for Cybertron received generally favorable reviews, with many viewed it as an improvement over past Transformers games. It was praised for its multiplayer, character designs, and voice acting, with criticism given to the visual design of the game's setting. A sequel, Transformers: Fall of Cybertron, was released in August 2012.

War for Cybertron is set on the planet Cybertron, prior to the Transformers' contact with the planet Earth. Robotic in nature, each Transformer has the ability to transform from their robot mode to an alternate form, such as a tank or jet. The Transformers are engaged in total civil war with one another. A group of evil Transformers form a splinter group separate from the main faction. Known as Decepticons, they follow Megatron, their powerful and ruthless leader. The main faction, known as the Autobots, follow the command of Zeta Prime. However, Zeta Prime is killed, leaving behind an inexperienced leader, Optimus, who must lead the Autobot forces to prevent Megatron from corrupting the planet, itself a Transformer, with Dark Energon. The Decepticon story is told in the first five chapters of the game, with the Autobot story directly following it. Players may choose to start either campaign first regardless of chronological order.

In the Decepticon campaign, Megatron fights to return the Transformers' home planet of Cybertron to what he refers to as a golden age. It opens as Megatron, having heard legends about Dark Energon, an unstable substance with the power to corrupt life on the planet, and the Decepticons attack an orbital research station guarded by the Autobot Sky Commander named Starscream and his forces. After fighting through hundreds of Starscream's soldiers; Megatron, Barricade and Brawl reach the Dark Energon manufacturing plant, and Megatron immerses himself in it. Inspired by Megatron's ability to handle the Dark Energon, Starscream asks him to teach him how to control it in return for his service, defecting to the Decepticons. Shocked by his betrayal, Starscream's colleague Jetfire escapes the space station, vowing to warn the Autobot leader Zeta Prime.

Megatron sends Starscream, and his twin brothers Thundercracker and Skywarp to reactivate an Energon bridge which will feed the station with raw Energon, allowing the manufacturing of more Dark Energon. Once they succeed, Megatron then develops a plan to infect the core of Cybertron with Dark Energon, feeling that he can gain control of the planet once it is infected. He launches a full-scale assault on the Autobot capital city of Iacon, looking for an item called the Omega Key, which he will use to enter Cybertron's core and infect it. The Decepticons learn that Zeta Prime has placed the key under his personal guard. Megatron's forces enter the chambers of Zeta Prime and defeat him in battle. Zeta Prime tells Megatron that the Omega Key is not actually what unlocks access to the core, but is the means to activate the true key, a colossal Transformer known as Omega Supreme.

Now activated, Omega Supreme pursues Megatron and his minions relentlessly. Megatron, Soundwave and Breakdown devise a plan to lure Omega Supreme to a rooftop defended with turrets, where the giant Transformer is ambushed. Omega Supreme sustains heavy damage and plummets to Cybertron's lower levels. The Decepticons follow Omega Supreme and engage him in a lengthy final battle, in which Omega is finally defeated, infected with Dark Energon, and captured by the Decepticons. Megatron forces Omega to open the door to Cybertron's core and travels there with his minions. Upon arrival he infects the core of Cybertron, also a Transformer, with Dark Energon, which then begins to spread over the entire planet.

The Autobot campaign starts with Zeta Prime, leader of the Autobots, being reported dead by scout Bumblebee who personally informs Optimus of this. Optimus then decides to temporarily take the mantle of leadership. Optimus, Bumblebee, and Optimus' friend Ratchet lead a defensive campaign to protect their home city of Iacon. The trio activate the city's defense guns and reactivate the communication grid. They then travel to the Decagon Plaza where the three Autobots battle the former Autobot Starscream and after severely wounding him, they force him to retreat.

Shortly afterward, the Autobots receive a distress call from Zeta Prime, - revealed to be alive - who informs them that he is being held at Kaon prison. Taking Bumblebee and Sideswipe with him, Optimus allows himself and the others to be captured in order to infiltrate Kaon. With help from Aerialbot Air Raid, the Autobots succeed in releasing all of Kaon's Autobot prisoners, who escape on Decepticon transports. Optimus, accompanied by Bumblebee and Sideswipe, find Zeta Prime's cell guarded by the loyal decepticon communications officer Soundwave. A fight ensues in which he deploys his minions Frenzy, Rumble and Laserbeak. Eventually, Soundwave and his minions retreat due to extensive damage, but not before Soundwave delivers a fatal shot to Zeta Prime. The Autobots release Zeta Prime, who dies shortly thereafter from his previous injuries after his battle with Megatron and being shot by Soundwave. Optimus returns to Iacon with Zeta Prime's body and speaks with the high council who declares Optimus the new Prime and informs him of Megatron's activities.

Optimus is given the task of removing the Dark Energon from Cybertron's core by the council. Optimus and his old friend Ironhide, along with rookie Autobot soldier Warpath first attempt to rescue Omega Supreme, who is being tortured by Dark Energon, from the Decepticons. They call in Ratchet who heals Omega Supreme. The Autobots free Omega Supreme and gain access to Cybertron's core. Struggling against a mysterious corrupted worm and countless Decepticons, Optimus then speaks with Cybertron's core, which informs him that it has been heavily damaged by the Dark Energon. It states that it can repair itself by shutting down, but the process will take millions of years during which Cybertron will become cold, barren, and lifeless. The core then tells Optimus that if he carries a small piece of the core with him, the core can still survive during the repairs. Optimus accepts the burden and the core relinquishes the Autobot Matrix of Leadership.