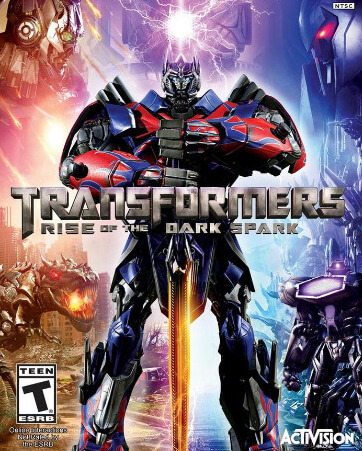 Transformers: Rise of the Dark Spark is an action-adventure video game based on the Transformers toy franchise. It was developed primarily by Edge of Reality, with the Nintendo 3DS version developed by WayForward Technologies. It was published by Activision and released worldwide on June 24, 2014. It is the third installment in the War for Cybertron series and the fourth installment in the movie game series. The game was released on June 24, 2014 for Microsoft Windows, Nintendo 3DS, PlayStation 3, PlayStation 4, Wii U, Xbox 360, and Xbox One, to negative reviews from critics, many criticized the bland story, inconsistent difficulty and unfulfilling combat. The game is set before the film Transformers: Age of Extinction, and between Transformers: War for Cybertron and Transformers: Fall of Cybertron.

The 3DS version of the game is a strategy game role-playing video game. Melee combat is turn-based. The player is given three rounds to deplete their opponent's health. If successful, the enemy is removed from the overworld map. The player can choose from seven different attacks, each with their own recharge time after each use.

Transformers: Rise of The Dark Spark has an extra mode called "Escalation". It is an online multiplayer mode where four players fend off waves of increasingly tough enemies, returned with the addition of upgradable defenses. The mode features over forty playable characters, and has levels based on both Cybertron and Earth. Escalation mode is absent in the Wii U and 3DS versions of the game. In addition, experience points collected by players in both single and multiplayer will be shared.

The game begins in continuity with the film, wherein a mysterious purple meteor crashes into Earth (Chapter 1, 10-14). The Autobots reach the crash site and Optimus sees an ancient Cybertronian relic called the Dark Spark, the antithesis to the Matrix of Leadership. Whereas the Matrix grants wisdom, the Dark Spark gives the user the power to bend the universe and its inhabitants to their own will. The Autobots clear out the mercenaries defending the relic, but fail to stop the bounty hunter Lockdown from escaping with the relic. The perspective changes to Cybertron, where Megatron and Optimus give explanations to their factions' current state: the Autobots face their darkest hour, where the Decepticons are near victorious.

On Cybertron (Chapter 2-9) and within the War for Cybertron continuity, Megatron sends Soundwave, Starscream, and Shockwave to the Crystal City vault to find the Dark Spark in order to wipe the Autobots from the face of the universe. They encounter heavy resistance from subterranean bugs. Shockwave deviates from the course as he tries to stop these bugs, where he encounters the Insecticons Hardshell, Kickback, and Sharpshot. Upon defeating them Shockwave convinces them to join the Decepticon faction. The team reaches the vault, which is guarded by ancient warriors. After defeating the warriors, the group finds that keys are needed to open the vault. Once all the keys are retrieved, the vault opens to reveal the Autobots Ironhide and Sideswipe inside, who then steal the Dark Spark. They escape through a door just before it closes and locks.

Sideswipe and Ironhide then rally with Optimus and Bumblebee at a train station. Sideswipe tries to call for a train, but it leaves before the Autobots can get onto it. While waiting for another to arrive, the Autobots have to defend themselves against a horde of Insecticons and Starscream. The next train arrives and the Autobots board it. It travels only a short distance before Shockwave detonates a bomb that destroys the train.

The Autobots emerge from the wreckage and Optimus tries to fool the Decepticons into thinking he has the Dark Spark. The Insecticon Sharpshot informs Shockwave that Ironhide is actually the one carrying it. The two give chase after Ironhide, and forcefully take the Dark Spark from him. Autobots attempt to stop them during their escape, but the two flee to the lower levels of Cybertron. There they encounter a ruin that was once used to house the Dark Spark. While Sharpshot powers up the exit door Shockwave gleans information from the computer logs. The two make it through the door, and meet up with the Combaticons who escort Shockwave to Megatron.

During the escort, Swindle and Shockwave are ambushed by Cliffjumper and a group of Autobots. Swindle eventually overpowers Cliffjumper, but the Autobot gets away before Swindle can kill him. Shockwave and Swindle then continue making their way to Megatron. They arrive at the gates of Kaon only to find it attacked by Autobots. After a lengthy battle the Combaticons combine into Bruticus and eliminate the rest of the Autobot troops. Cliffjumper tries to destroy Bruticus by planting a bomb on his back but is quickly taken captive. With Megatron having the Dark Spark, Optimus must infiltrate Kaon with Jazz to rescue Cliffjumper and destroy the Dark Spark. Their rescue is successful; Cliffjumper and Jazz escape, leaving Optimus to confront Megatron, now in control of the Dark Spark. The two battle as Megatron uses the Dark Spark (through a huge chunk of Dark Energon) to revive dead Autobots as mindless drones. The Dark Spark is expelled from Megatron's body during the fight's climax, hurling it into space.

(0) Comments on "Transformers: Rise of the Dark Spark Full Version"