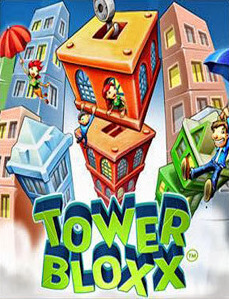 Tower Bloxx is a strategy/puzzle mobile video game developed by Digital Chocolate's Helsinki-based studio. The game features two types of gameplay, "Build city" and "Quick game". The "Quick game" is a type of endless mode that exists in many puzzle games.

The objective of the "Build city" game mode is to build a city with as many inhabitants as possible, building various types of towers: Residential (blue), Commercial (red), Office (green), and Luxury (yellow). The number of people that can potentially inhabit any given building is based on the skill of the player through a "building minigame." The more precisely the player can stack the parts of the building, the higher the number of people that can inhabit the building.

The higher population the city gets, the higher "City level" the city will have, at a maximum of 20. Also, each "City level" has its own name (e.g. Town, City, Metropolis). When the player achieves the defined population by placing a new building, he or she will be notified by a popup window. During some "City level" achievements, the player will unlock the feature to get buildings with "bonus roofs" when he or she builds a building of a certain type, with a minimum of a special house population (before placing the roof).

In the highscore, the highest score (population) of "Build city" games is stored.

Blue buildings can be built anywhere, but have the lowest population potential.

Red buildings have the second lowest population potential, but must be built adjacent to a blue building.

Green buildings have the second highest population potential, but must be built adjacent to both a red and a blue building

Yellow buildings have the highest population potential, but must be built adjacent to a red, blue and green building

The "Quick game" mode is a kind of endless mode, where the player plays the "building minigame" without any limit on the number of blocks one could place. During the game, the background starts at ground (as in the Build city mode), but gradually reaches higher and higher in air, and if you build far enough, you will pass the moon and other planets as well.

Highscore is stored for the top three best quick games, and this highscore also shows the number of building blocks placed in those games.