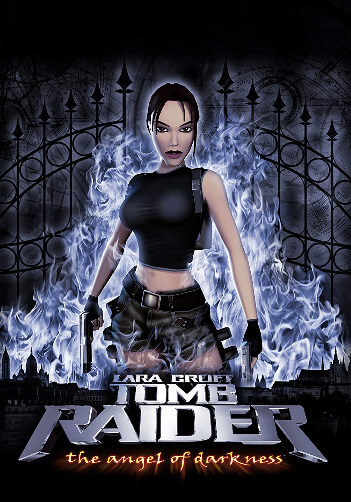 Tomb Raider: The Angel of Darkness is an action-adventure game, the sixth instalment in the Tomb Raider series, acting as a direct sequel to Tomb Raider Chronicles and The Last Revelation. It was developed by Core Design and published by Eidos Interactive. The game was released in 2003 for Microsoft Windows, PlayStation 2 and Mac OS X and was the first Tomb Raider title to be released for the PlayStation 2 console. The storyline follows Lara Croft as she attempts to clear herself of being the suspect of her former mentor Werner Von Croy's murder while investigating the activities of a black magic cult.

The game's development began three years before release. The intention was to create a different game from previous entries in the franchise, one that could compete better with newer action games, and to fully exploit the potential of the sixth generation of gaming platforms. The production was fraught with difficulties, and the game ended up being delayed twice. When released, the game sold 2.5 million copies worldwide, but it received mixed to negative reviews for its poor controls and multiple bugs. In the aftermath of the game's release, a potential trilogy was scrapped, and development of the franchise was transferred to Crystal Dynamics for the next entry in the series.

Tomb Raider: The Angel of Darkness, like previous Tomb Raider games, is a third-person action-adventure puzzle game. Players control the main series protagonist Lara Croft through the majority of the game. The majority of Lara's basic moves are carried over from the previous instalment, such as walking, jumping, climbing, swinging on ropes and standard gunplay. Her new moves include a small hop, army-crawling, hand-to-hand combat and a "super-jump" that can be performed while running. Lara can also sneak up on enemies and perform stealth attacks, flatten herself against walls and peer around corners. Lara's ability to sprint, present in the three previous entries in the series, is only available when the player opens a cabinet containing gas masks in the 'Galleries Under Siege' level. Her weapons arsenal is also modified from previous games, featuring new weapons such as a K2 Impactor stun gun and upgraded versions of weapons like the shotgun.

Unlike previous games in the series, Lara has a stamina meter which depletes while she is performing bouts of climbing: if the bar empties before reaching her destination, she falls. The rate at which the meter decrease slows if the player performs special actions that increase Lara's strength. These actions are also necessary to progress in many of the levels. The game incorporates elements similar to a role-playing game, whereby Lara can talk with various NPCs encountered throughout the environments and choose what kinds of answers to give: early in the game, these answers will directly affect her progress through the story. The game also features a second playable character, Kurtis Trent. Initially appearing to be an antagonist, he becomes controllable by the player late in the game. He features mainly identical moves to Lara, and his sections of the game are more based around combat.

Angel of Darkness follows on from events in Tomb Raider: The Last Revelation and Tomb Raider Chronicles, where Lara Croft was presumed dead. An unspecified time later, Lara arrives in Paris at the request of her former mentor Werner Von Croy, who was tasked by a man named Eckhardt to find a set of artifacts known as the Obscura Paintings. The city, and Von Croy, are gripped with fear over a serial killer the press have dubbed the "Monstrum". During an argument between Lara and Von Croy, an unknown force attacks them, and Lara is knocked unconscious. She wakes to find Werner dead and her memories of the attack blurred. Suspected of his murder, Lara goes on the run. After retrieving Von Croy's journal from a colleague named Margot Carvier, she learns that Von Croy discovered the location of the fourth Obscura Painting beneath the Louvre; during her time in Paris getting help from local businessman and mob boss Louis Bouchard, Lara is stalked by Kurtis Trent, the last survivor of a society called the Lux Veritatis who are sworn to fight against Eckhardt's plans.

After infiltrating the Louvre, she learns that the paintings hide pieces of the Sanglyph, an alchemical artifact created by Eckhardt hundreds of years before. The paintings were seized and hidden by the Lux Veritatis centuries before. After retrieving the Painting from its hiding place, Lara is ambushed by Kurtis and robbed of the painting. The two escape the Louvre as it is assaulted by mercenaries, with Kurtis using a magical disc to keep both Lara and the mercenaries at bay. The two are both knocked out by a shape-shifting stranger who steals the Painting. Lara is picked up by Bouchard, who takes her to Von Croy's apartment to find further clues. However, Bouchard sends an assassin to kill Lara; she is able to kill him and heads for Prague, where a new Monstrum killing has taken place. Arriving in Prague, she finds the location of the final Painting and re-encounters a captive Bouchard. He reveals that Eckhardt is planning to use the Sanglyph to awaken the Cubiculum Nephili, the last surviving member of the hostile Nephilim race, and breed them back into existence. Bouchard is later murdered by Eckhardt, who is revealed to have been killing and extracting samples for his experiments under the guise of the Monstrum. Lara infiltrates Eckhardt's fortress, the Strahov Sanitarium, and encounters members of the Cabal, a secret society that shares Eckhardt's ambitions. While going through the complex, she switches off the power, releasing a rabid creature called the Proto-Nephilim. Later on, Lara is locked in a containment area by Kurtis so he can turn the power back on without interference.

Kurtis succeeds, finding his way through the Sanatorium and killing the Proto-Nephilim. Forming an alliance, Lara retrieves the final Painting, while Kurtis goes to retrieve a Periapt Shard, one of three magical daggers which can kill Eckhardt. After retrieving the Painting, Lara is forced by Eckhardt to hand over the Painting to save Kurtis's life. After Eckhardt releases one of the Cabal's monsters on them, Kurtis helps Lara escape—giving her the two Periapt Shards in his possession—before killing the monster, being seriously wounded in the process. Lara recovers the final Shard and reaches Eckhardt, who reforms the Sanglyph and begins reviving the Cubiculum Nephili. Lara succeeds in wounding him, but is stopped by Karel, Eckhardt's right-hand man. Karel proceeds to kill Eckhardt, revealing himself to be a Nephilim who has been secretly aiding Lara using his influence in the Cabal and shape shifting abilities. He offers Lara the chance to join him, but Lara refuses after remembering that it was Karel who murdered Von Croy in Eckhardt's form. Lara uses the Sanglyph to destroy the Cubiculum Nephili, causing an explosion that kills Karel. On her way out, she finds Kurtis's weapon and it leads her towards the monster's chamber. Smiling, Lara walks through the door into shadows, ending the game.

(0) Comments on "Tomb Raider: The Angel of Darkness Full Version"