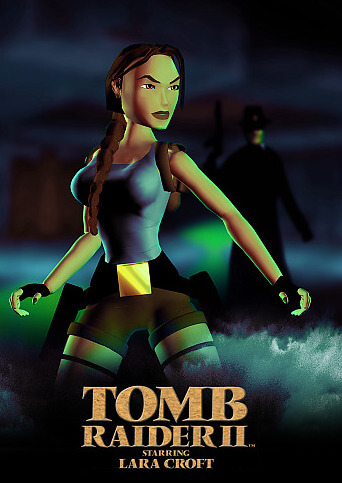 The game sold over 8 million copies worldwide as of 2003, making it one of the best-selling games released up to that point and the second best selling of the franchise. The game is also the second overall best selling PlayStation title in the UK.

The gameplay of Tomb Raider II builds upon the basic set up of the original game. Innovations in Tomb Raider II include new weapons, extra moves, and a set of vehicles. The crystal saving feature on the PlayStation version was eliminated, and instead the player may save at any time like in the PC version, save for a few special locations.

Lara can now climb ladders and perform a mid-air roll used to land facing in the opposite direction. The range of weapons has been expanded to include a harpoon gun (though more correctly termed a speargun), a grenade launcher, an M16 rifle (which requires Lara to assume an aiming stance to fire), and automatic pistols, which replace the magnums from Tomb Raider. The inventory now includes pyrotechnic flares, which are used to light up dark corners. The two vehicles are a motorboat (in Venice) and a snowmobile (in Tibet). Both are used to travel long distances across the map and can speed up on ramps or run over enemies.

The object of the game is unchanged from the previous game: each level must be finished by reaching the exit. Secrets no longer immediately reward the player with weapons or medipacks. Instead, each secret is marked by a coloured dragon ornament: silver (or stone), jade, and gold, according to the difficulty of their location. Only when Lara collects the last of all three dragons in a level will she receive a bonus, which usually consists of medipacks and ammunition, and infrequently a new weapon.

The story of Tomb Raider II surrounds the mythical 'Dagger of Xian', a weapon which was used by an Emperor of China to command his army. By plunging the weapon into its owner's heart, the weapon has the power to turn its bearer into a dragon. The last battle fought with the Dagger ended when the warrior monks of Tibet removed the knife from the Emperor's heart, whereupon the Emperor died. The Dagger was then returned to its resting place within the Great Wall.

In the present day, near the remains of the Great Wall, Lara Croft investigates the legend of the Dagger. Upon reaching the door which leads to the dagger, she is attacked by a thug who claims to work for Marco Bartoli, a Venetian Mafia leader who has an obsession with the ancient lore of the Dagger. After travelling to Venice, Lara makes her way through Bartoli's hideout and an opera house where Bartoli's men are plotting a heist. Lara follows Bartoli aboard his aeroplane, but she is knocked unconscious.

The plane lands at an oil platform. The cult of Xian have killed all the rig's staff and are carrying out excavations on a sunken ship called the Maria Doria, a luxury ocean liner which was owned by Marco's father. When Lara regains consciousness, she retrieves her weapons and makes her way through the oil rig. She learns from an imprisoned Tibetan monk, Brother Chan, that the shipwreck carries an ancient Tibetan artifact called the Seraph. Lara dives alongside a submersible, arrives at the shipwreck, and retrieves the Seraph.

She heads towards the Barkhang Monastery in Tibet via aeroplane. There she is helped by monks in confronting the thugs of Marco Bartoli. She finds and uses five prayer wheels to open a room to hold the Seraph. She continues her journey inside the catacombs to find the Talion, a key used to open the door to the dagger. Exiting the caves, she takes off in a jeep. Two guards follow Lara, but she escapes, shooting the guard and causing their vehicle to crash into a tree.

Back in China, Lara opens the chamber holding the Dagger. Before she reaches the artifact, however, Lara is plunged into the catacombs beneath the Great Wall. She makes her way back to the chamber, but Bartoli has already used the dagger and is carried through a portal. Lara goes through the portal to a realm with green floating islands and warriors which come alive when triggered. She moves to the room where she witnesses Bartoli transformed into a dragon. Lara renders the creature unconscious and pulls the dagger from Bartoli's heart, killing him. The whole tomb begins to collapse, and a part of the Great Wall is destroyed. Lara escapes and is knocked unconscious upon landing outside the tomb, but she regains consciousness the next day. Lara returns home and is cleaning the dagger when an alarm goes off. The remainder of Marco Bartoli's men have tracked her down to England and are invading her mansion. She overpowers them. The final shot is of Lara, disrobing before entering the shower. She breaks the fourth wall as she turns to the player and says: "Don't you think you've seen enough?" She then blasts her shotgun at the player.