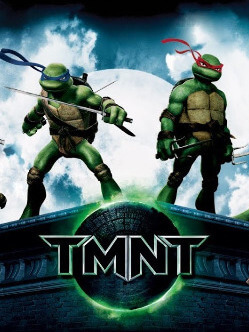 TMNT is a single-player action-adventure multi-platform action game starring the Teenage Mutant Ninja Turtles. It is based on the 2007 film of the same name, and was released three days before the actual movie's release for the Xbox 360, Wii, PlayStation 2, Nintendo GameCube, Nintendo DS, and PlayStation Portable, as well as for the PC on March 20, 2007.

The gameplay in TMNT contains many acrobatic segments in the vein of another Ubisoft game series, Prince of Persia. The game features 16 story levels and 16 unlockable challenge levels. The game also features four playable characters, each with their own unique fighting style and abilities. The game encourages cooperative gameplay, as the player will have to use each turtle's special abilities to navigate through their environment.

The game's plot is based on the 2007 film TMNT, but is told in the form of a flashback by the Turtles and Splinter.

Ubisoft secured the rights from Konami, who had produced all the previous TMNT games. The game's creative director Nick Harper said "The TMNT movie is all about the emotions associated with family and teenage angst. We've taken that philosophy and turned it into gameplay mechanics that will be fun and challenging." Ubisoft has stated the focus within the game is "on the four turtle brothers finding out their differences and getting through family problems".

TMNT received mixed reviews with many critics praising its action platforming, while criticism went to its repetitive combat, bad camera, and lack of multiplayer. IGN gave the GameCube, Xbox 360, PlayStation 2, and PC versions a 6.0 out of 10, saying that the game is "Strictly for the kids". The Wii version was criticized for using very little of the Wii Remote's unique capabilities, since one can only move the remote back and forth to use the turtles' weapons, with the weapons lacking free-direction attacks. When reviewing the Nintendo DS and Wii versions of TMNT, the UK Official Nintendo Magazine commonly compared the two games to the 1989 arcade game of the same name, and even said in a hint guide that "Turtles games were once better". Nintendo Power gave it 5/10, saying "The real shame is that TMNT once had a legacy of good video games-recent titles such as this one have sent that history to the sewers."

As of April 26, 2007, TMNT has sold 1.1 million copies across eight platforms. For the PlayStation 2, it was re-released as part of the "Greatest Hits" label.