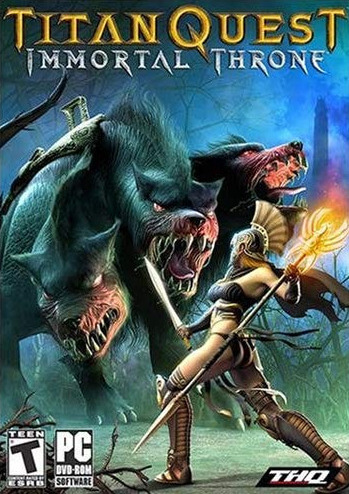 Titan Quest: Immortal Throne is an expansion pack to the 2006 action role-playing hack and slash video game Titan Quest. Developed by Iron Lore Entertainment, it was originally published by THQ in 2007: it would be Iron Lore's last original project prior to their closure in 2008. Following directly on from the events of Titan Quest, Immortal Throne follows the player character as they are confronted by a new wave of monsters attacking the mortal realm from the Underworld. Gameplay is identical to that of Titan Quest, with navigation through locations around the Ancient world and action combat. For Immortal Throne, improvements were made to the inventory system and multiplayer, and a new character class was added.

Development began in July 2006 after work was completed on Titan Quest, with preparatory work beginning prior to this. Staff members returned while assuming different roles to the original game: Michael Verrette produced, Michael Sheidow acted as art director, the script was written by Dean O'Donnell, while Arthur Bruno took over as main designer. Scott Morton returned to compose new tracks. The concept was to both expand upon the narrative of Titan Quest and improve the gameplay experience. It also went for a darker aesthetic compared to the original. Announced in November 2006, it released to a positive critical reception and favorable sales.

Like its predecessor Titan Quest, Immortal Throne is an action role-playing game where the player-created character navigates environments within the Ancient World: in Immortal Throne, the player begins by exploring locations like Rhodes and Epirus, before entering the Underworld and passing through supernatural locations such as the Styx and Elysium. Players progress through the story and different locations by completing quests from non-playable characters (NPCs) for various rewards, including money and experience points.

Combat happens in real-time, featuring a hack and slash style where the player character attacks enemies highlighted with the mouse. As the character gains experience levels through completing quests and killing enemies, they can access Mastery skill trees linked to different combat styles, similar to a character class system: players can have access to a primary and secondary skill tree, which grand either passive or active boons upon characters. Items and equipment, which include new armor and weapons alongside healing potions, are acquired from defeated enemies or purchased from merchants. Players of the original Titan Quest can import their current selected character into Immortal Throne, while new players must complete the main campaign before accessing Immortal Throne.

Immortal Throne features multiple additions and alterations over Titan Quest. The main addition is a new Mastery titled Dream Mastery: available to new players from the start of the main campaign, it is a magic-focused skill that relies on illusion and stasis effects to disrupt enemy groups. Among the abilities available are putting nearby enemies to sleep until they are hit by a weapon strike, turning enemies on each other, and effects which make enemies take damage when they strike the player or faster health and energy recovery. In addition to extra quests, new items and equipment are included. An additional item slot for the player character is reserved for Artifacts, charms crafted for the player by Enchanters after the player discovers enough Arcane Formulae after defeating enemies. Artifacts are divided into three levels (Lesser, Greater and Divine), which grant a variety of status effects depending on their level. A separate type of item are Scrolls, expendable items that produce powerful effects and can be equipped in a similar fashion to healing potions. Additional sellers and storage Caravans are included in between towns. Multiplayer functions return from the original game, while adding refinements such as the ability to automatically join parties and engage in player-versus-player matches.

Immortal Throne picks up immediately after the events of the main game: after the titan Typhon has been defeated, the Olympian gods hail the player character as humanity's hero, and decide that the human world can function without their protection. The player is transported to Rhodes, where a new wave of monsters has appeared: this is blamed by Tiresias on the player's activities creating strife in the Underworld, the source of the monsters. To discover the reason behind the attacks, the player must seek out the sorceress Medea, who sends the player to a region near the Pindos Mountains. Following a path into them, the player finds the path into the Underworld, where the dead are trapped in limbo due to the Judges of the Underworld no longer passing sentence on them. After the player defeats Charon and Cerberus, who have abandoned their original purposes, they head through Elysium. The player learns that Hades, god of the Underworld, is launching an attack on the living world now that the more powerful Olympians have left humanity unprotected. After trapping Hades' army in the Underworld, the player then defeats Hades himself. Persephone then appears, dubs the player "Godsbane" and declares that humans have earned the right to control both life and death.