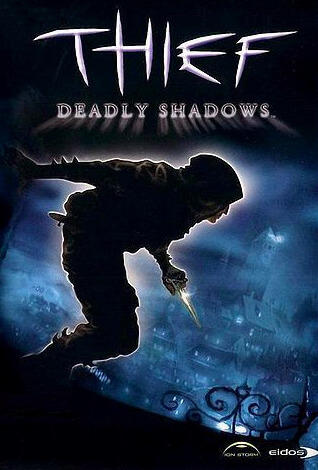 Thief: Deadly Shadows is a stealth video game developed by Ion Storm for Microsoft Windows and Xbox that was released in 2004, on May 25 in North America and on June 11 in Europe. It is the third video game in the Thief series.

In Thief: Deadly Shadows the player takes the role of Garrett, a master thief. It is set in a fantasy world resembling a cross between the Late Middle Ages and the Victorian era, with more advanced steampunk technologies interspersed. One of the game's major new features was the ability to explore the City. While previous games sent Garrett straight from mission to mission, Thief: Deadly Shadows allows him to walk the City streets between missions where he can steal from passersby, spy on the townspeople's daily lives, and search for side quests in addition to major story missions. The game also introduced an ability to switch between first and third person views, and to flatten against walls.

Development for both platforms started simultaneously. Thief: Deadly Shadows received generally positive reviews. The level "Robbing the Cradle" received particular praise for its horror design. A reboot of the Thief series, Thief, was released by Eidos Montréal in 2014.

Thief: Deadly Shadows is a first-person and third-person 'sneaker', similar in gameplay to the previous games in the series. The player takes the role of Garrett, an independent master thief who aims to steal his way through the City, using stealth, devices and weapons, in order to complete objectives and make profits on the side. The player may steal from or mug innocents for loot, and avoid, distract, attack or knock out guards. Loot and weapon ammunition may be stolen simply by 'touching' it, when close enough. Locked rooms and chests can be broken into after completing a lock-picking minigame.

Mission levels may be traversed by sneaking through the shadows, since walking or running will alert nearby guards, who detecting the presence of a vandal will search around for an unknown face. Upon discovering the player, the guards will give chase and possibly hunt them down. In order to make minimum noise, the player must actively monitor the noise each action creates. The player may usually view a hand-drawn map of the immediate surroundings; realistically, the player's location is not indicated on the map and must be deduced from the surrounding landmarks. The game has a fairly open-ended structure, allowing the player to approach every objective in multiple different ways. Upon completion of all objectives, the mission ends and the plot is further revealed through cutscenes. Due to limited memory, city and mission levels are divided into parts connected by load zones.

After each mission, the player reappears into the nearest district within the City, which may be freely explored by foot. Most civilians do not recognize Garrett as a criminal, although wanted posters are frequently visible on City walls. City areas unlock as the player progresses through missions. Within the City, the player may sell previously stolen goods on the black market to fences, for gold, which can be used at various shops to purchase weapons, equipment and supplies. Special loot such as artifacts cannot be sold but are involved in the objectives and plot. As they are collected, loot, gold, equipment and weapons are retained in the player's inventory through the game, making it possible to 'hoard' for later use. While exploring the City, the player may break into homes for additional loot, spy on and steal from the townspeople, and complete the occasional side quest. Allying with major factions will motivate its members to fight alongside the player, against the City Watch guards.

Both the PC and Xbox versions of the game are relatively easy to play, with conventional and reconfigurable shooter-style controls. The first mission is an interactive tutorial that guides the player through a typical robbery, set in an Inn. The player may save progress at any point, and must do so manually from time to time, since the game never autosaves. The Xbox version has considerably more tactile controls since it uses a game controller instead of an all purpose keyboard. Within the lock-picking minigame, a rumble effect can be felt based on the relation between the lock picks and tumblers. Movement of the right analog stick also allows Garrett to turn his head while picking locks, allowing the player to survey their surroundings and pick locks simultaneously. Moving the left analog stick gently makes Garrett creep, and forcefully makes him run.