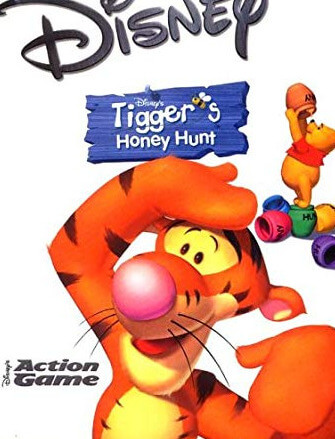 Tigger's Honey Hunt is a video game that was released in 2000 for the Nintendo 64, PlayStation and Microsoft Windows. The game was developed by DokiDenki Studio a third-party developer, for Disney Interactive whom published the PC version and co-released the game on home consoles through NewKidCo in North America, while the European release was published by Ubi Soft. In 2002 the game was re-released in the UK as part of a two pack of Disney PlayStation games along with the game Donald Duck: Goin' Quackers. A spiritual successor titled Pooh and Tigger's Hunny Safari was later released, with different mini games but otherwise sharing much of the same story.

Winnie the Pooh decides to have a party for his friends but needs more honey. He asks Tigger, a tiger with spring-like tail, to help him collect the honey they will need to have the party. Other friends from the Hundred Acre Wood such as Owl, Rabbit, Kanga, Piglet and Roo, also help Tigger find the honey they will need. After traveling through six areas and completing three minigames, Tigger goes to talk to Christopher Robin about finding more honey and he suggests different kinds of food. The party is a big success thanks to Pooh and Tigger.

There are two forms of play in Tigger's Honey Hunt, 2½ dimensional platformer style levels, and secondly one of three mini games, which make up 9 levels. In the platform areas Tigger must find a required number of honey pots to exit a level. He can then return after collecting any of the two special bounces he learns along the way, which will help him find the rest of the 100 honey pots that are hidden in each of the platform levels. Some enemies such as bats, crows, and woozles can be defeated by jumping on them, but others like heffalumps can only be avoided.

Apart from the main game, there are three minigames that are based on classic games, and can be played with other players. Rabbit Says is a variation of the game Simon says. Pooh Stick is a game of throwing sticks into a river, and allowing the different speed currents to push them to the finishing line. Paper, Scissors, Owl is a version of the game Rock-paper-scissors.

Most reviews of the game were positive citing the game's graphics, animation, and cut scenes. 64 Magazine described the game as "the most faithful representation of any cartoon character on any games machine so far!" The PlayStation and PC versions of the game have digital animated scenes with voice over, and mini clips from the cartoon; however, the N64 version does not have the voice messages or the cartoon scenes, which N64 Magazine describes as "something that looks, and plays as if it's something still half way through development." Nintendo Power pointed out that "The game relies heavily on text, and more spoken dialogue... would have been more appropriate for its audience."