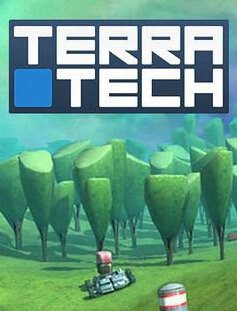 TerraTech is a construction sandbox game with action elements created and released by British developer Payload Studios on 10 August 2018 for Windows and Xbox One, four days later for PlayStation 4, and on 29 May 2019 for Nintendo Switch.

A construction sandbox focusing on vehicular combat, the game offers a variety of blocks with different functions that can be combined in various ways using attach points on each, with the control block - a cab - always serving as a centrepoint. Wheel blocks in contact with ground enable driving, while wing blocks generate lift for flying and other blocks provide additional functions to the tech they are attached to. Beside vehicles, the game enables construction of static bases anchored to the ground that are mainly used for storage and crafting. Blocks can be crafted using resources gathered from the environment and a system of resource silos, conveyors and automatic factories (all blocks themselves).

campaign: a loose storyline in which the player is an interplanetary prospector tasked to gather resources for famished Earth. The player starts with a cab and a handful of blocks on a procedurally generated map, fighting rival prospectors and taking their blocks, unlocking licenses of various factions which enable them to acquire higher-level blocks. In this mode, resources and blocks can be sold for the in-game currency "Block Bucks" and spent for purchasing new blocks.

creative: unlimited blocks and optional enemies, for building and testing constructions without having to acquire resources

sumo: tech vs. tech battles in an arena

R&D test lab: similar to creative mode, but with added experimental blocks that aren't yet included in the official release. For separate purchase as downloadable content.

The developers worked the concept into a playable demo in 2014 and presented it at indie games shows such as Rezzed, as well as actively promoted it through Steam, IndieDB, Twitch and other web platforms. A successful Kickstarter crowdfunding campaign followed after which an open beta was released as early access on the Steam platform. After a protracted development period, the version 1.0 was officially released in August 2018.

Despite being released, the game remains in active development, and several major new features are planned.

Reviewers compared the gameplay to playing with Lego bricks, which they considered exciting and invoking of childhood memories. User interface, controls and the game AI, on the other hand, were less commended. The reviewer for AbsoluteXbox was particularly critical of unintuitive camera controls, clumsy driving performance and frustrating combat in the Xbox version.