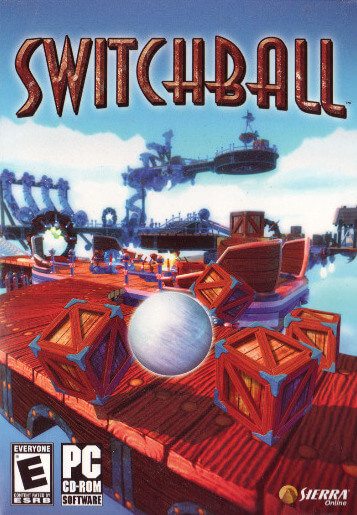 Switchball is a 3D action-puzzle game, made by Swedish developer Atomic Elbow, which was released for Microsoft Windows on June 26, 2007, on Xbox Live Arcade for the Xbox 360 on November 7, 2007 and on PlayStation Network for the PlayStation 3 on September 17, 2009.

The game puts the player in the role of a marble, which is guided through a narrow winding course suspended in mid-air in five different environments: Skyworld, Iceworld, Caveworld, Cloudworld and Lavaworld.

Using PhysX as its core physics engine, the marble can be "morphed" into different balls with unique physical properties, like a Marble Ball, a Power Ball (which can be charged and have an accelerated "dash", a "jump" ability or switchable "magnetism" properties), a Steel Ball (which can push heavy objects around), and so forth. Each course contains obstacles and traps, such as wooden blocks, sheets of cloth, spinning fans, magnets, and cannons. The game uses physics-based puzzles as well, such as moving boxes or weighting ramps; also, different balls react to the environment in different ways; Steel Balls, for example, will tear cloth platforms.

Each level is timed, and players are rewarded with Gold, Silver and Bronze medals, depending on how quickly they complete the level.

Originally called CrazyBall, the game won "Best PC Game" during the 2005 Swedish Game Awards and was a finalist in the "Technical Excellence Class" during the 2006 Independent Games Festival.

The gameplay is similar to Atari's 2004 game Ballance, but features worlds instead of levels.

GamesRadar awarded the PC version of Switchball 8 out of 10, praising the AGEIA physics engine, commenting "the rolling and bumping and knocking and flinging are all exquisitely well done. And physics, the best thing to happen to games since explosive barrels, has a way of making you care." Out of Eight gave it a 7 out of 8 score, praising "There are some creative portions of the game requiring reasonable solutions that will challenge without frustrating." Team Xbox awarded the Xbox 360 version a 9.4 of 10, stating "Switchball is certainly one of the best puzzle games on XBLA." IGN commended the AGEIA physics engine, saying "The real star of Switchball throughout the entire experience, online or off, is the physics system."

CVG criticized the difficulty of the later level puzzles in its review of the PC version, saying, "It doesn't run out of brains, but in later chapters it does succumb to that misguided urge to crank up the pressure. This goes badly. Switchball is a thoughtful puzzle game, but neither its camera nor controls are up to the dexterity-driven tasks it sets here."