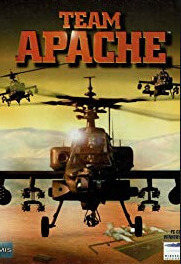 Team Apache is an attack helicopter flight simulator developed by Simis and published by Mindscape Group. The game emphasises on commanding a group of six AH-64 Apache crews of the US Army in battles against the Communist FARC insurgents in Colombia and the Russian military in Latvia.

Team Apache was at first developed by Simis under Eidos Interactive. When Simis' two lead developers, Jonathan Newth and Ian Baverstock bought the company back from Eidos, they became an independent development team once more and Mindscape purchased the publishing rights of the game.

The cockpit, sensor and flight modelling aspects of the game are a lot simpler than those of the Comanche series and the Longbow flight simulators. Cockpit renders are not very advanced, and instruments are difficult to read. This applies to the rendered cockpit and the floating cockpit. The clear cockpit view is the easiest to use, but there are no sensor overlays. The gunner selects the targets most of the time, and players have reported some issues with his/her AI. ECM, radars and lasers cannot be toggled on or off. The flight modelling is not the most accurate on the helicopter sim market. For example, unwise maneuvres that warrant a crash can be performed without a hitch. In addition, hovering is a lot simpler than in the Comanche and Longbow games.

Team Apache is a different breed of helicopter flight simulator. Unlike most flight sims, Team Apache focuses less on the realism of flight and weapons systems modelling, and more on the gameplay aspects - consisting of command, tactics and battlefield realism.

Team Apache is unique among simulations in that it gives the player unparalleled control over his/her combat unit. The player is not just flying missions- he is also managing the morale of his/her men, supply and maintenance, and the tactical planning that takes place before the mission. Although the player's control over these factors is rather basic, few, if any, simulations have as much depth as Team Apache. The geopolitical causes of Team Apache's wars, related in both the game's manual and the "daily" newspaper, are both sophisticated and plausible. Detailed military-style SITREPs create a thorough picture of the tactical situation, and ground forces can be seen in the game fighting each other all throughout the theater using fairly realistic deployments and movements. These details provided by the game, combined with the player's control over his/her men and his/her equipment, make Team Apache one of the most immersive combat simulations ever published in some player's opinions.

Perhaps the biggest drawback of the game is the lack of time compression. During the Colombian campaign missions are short, lasting less than 15 minutes in most cases, but the Latvian campaign missions may involve travelling more than 100 kilometers round-trip. The player may turn on autopilot during these long transit periods but must still stay alert for enemy contact. Depending on your point of view, this either increases the immersion experience or wastes time. Players should not be concerned about playing the same long mission over and over again, though, because the campaigns, although linear, can be played by accepting your defeats and team's casualties and moving on to the next mission.

An interesting fact is that in the Colombian campaign you can fly the other direction overseas and may get captured by intercepter planes from another country which even warn you to not fly further or you will be shot down.

The storyline in Team Apache is highly developed. It develops through FMV sequences, in mission briefings and newspaper articles.

In 1998, the Fuerzas Armadas Revolucionarias de Colombia–Ejército del Pueblo or FARC-EP (Spanish for "Revolutionary Armed Forces of Colombia–People's Army") has staged a large-scale guerrilla offensive against the government of Colombia. In its wake comes a wave of kidnappings and assassinations of high-ranking officials and their families. The corrupt and inefficient military of Colombia and police cannot hold their own against the insurgents, and need help from the United States. The United States needs to safeguard Colombia's oil industry and eliminate FARC's illegal cocaine industry.