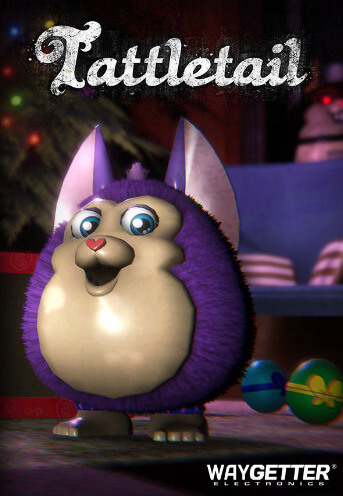 Tattletail is a video game created by Waygetter Electronics. The player must care for their virtual pet toy, Baby Talking Tattletail, while avoiding the pursuit of its recalled predecessor, Mama Tattletail (commonly referred to as "Mama"). The game was released on Steam on December 28, 2016.

Sometime after the game's full release, 2 updates were released, one adding multiple endings and the other adding an expansion campaign that takes place after the main game's campaign.

For the five nights leading up to Christmas, the player must tend to their Baby Talking Tattletail toy by feeding it, grooming it, and allowing it to charge while completing a set of objectives each night. While the Baby Talking Tattletail isn't a threat, it is prone to generating a lot of sound when its needs are not met, alerting Mama Tattletail of their location. While completing a set task, the player must avoid Mama by staying quiet when she is near (indicated by her mechanical grinding noises and glowing red eyes). Failure to do so or going too close will result in Mama attacking the player in a jump scare.

Players acquire a shake flashlight to navigate in the darkness, but Mama Tattletail has the ability to kill their flashlight when they point it directly at her. Baby Talking Tattletail is also afraid of the dark and is quite vocal about it, creating a necessity to recharge the flashlight by shaking it quickly. However, shaking it generates sound, so the player must be careful about when and where to shake.

Over the course of the game, a series of "Gift Eggs", presumably laid by Tattletail, are placed throughout the house. Collecting all of the eggs will result in the player achieving the "good ending" of the game.

The game takes place from December 20–25, 1998. The player wakes up on December 20 to open their Christmas present early. The present is the new fad toy, Baby Talking Tattletail. After playing with the toy briefly (which involves feeding and grooming it), the player puts it back into its box and goes back to bed. The next night the player finds the same Tattletail in the tumble dryer, with no indication of how it got there. The player then charges it, wraps it back up into its box and goes back to bed.

On Night 3, the player encounters the contents of an old nursery in the basement. In the corner sits the now-recalled Mama Tattletail (Design inspired by the Furby® and Teddy Ruxpin™️), along with a cassette tape which can be played using the toy. The tape contains a snippet from a story in a read-along style - including prompts to "turn the page" - about how "the children thought that Mama would never find them as long as she couldn't see them" but Mama would find them nevertheless. After the player finds the Baby Tattletail, it asks to be taken to “Mama”. The player returns to the spot to find that Mama has disappeared. Mama Tattletail then starts to hunt down the player when they try to clean up after Tattletail.

On Night 4, after a lengthy hide-and-seek session with another Tattletail, the player finds a VHS tape that shows several interchangeable camera feeds from what seems to be a Tattletail commercial (which is actually footage from the trailer). After some time, some of the camera feeds' names turn red, the lighting changes from blue to green and trash bags and obscured parts of inanimate or writhing human bodies appear.

On Christmas Day, the ending of the game depends on whether the player has collected all 22 eggs laid out across the game:

Bad Ending: If the player fails to collect all 22 eggs, it takes longer to open the present, and Mama Tattletail’s chase theme will begin to play. The gift box’s bow comes off and the lid’s position is slightly altered. The player then has to attempt to open it again, only to find the gift box is empty. Mama Tattletail then jump scares the player (implying that the ritual failed), ending the game and rolling the credits. This ending was the original canon ending before the release of "The Gift" Update.

Good Ending: If the player manages to collect all 22 eggs, their present is revealed to be the same Baby Talking Tattletail the player received when opening it 5 days early. Tattletail will then proceed to give the player a series of gifts - its birth tag and a golden flashlight. The player will then need to open the door of their mother's room and wake her up, triggering a white screen. The game ends with the Talking Tattletail saying "Thank you" for the player (considering the protagonist cannot yet speak), along with the player's mother yawning. This ending is considered canon in the Kaleidoscope DLC.

Joke Ending: If the player falls out of the map with Tattletail in their hands, Tattletail will begin to glitch out and start saying that the player broke "it" (more commonly known as the game). The game then ends and the credits roll. Although technically this ending was a glitch, it was awarded soon by the Waygetter Company with its own Tattletail dialogue. This ending will result in returning to the main menu with no progress.

The game was published under the name of the in-universe fictional toy company named Waygetter Electronics. In reality, the team is led by game designer Ben Esposito, and consists of character designer/co-developer Geneva Hodgson along with lead programmer Tom Astle. Cartoonist Ryann Shannon also stars as the voice of Talking Tattletail.

The game has received criticism for its resemblance to the Five Nights at Freddy's series for featuring similar elements, including its visual aesthetic, five-day time limit, and animatronic-based antagonists. GameSpew's Chris Mc praised its more structured gameplay, as well as its reproduction of nineties childhood fears. The game has also received very positive reviews on Steam.