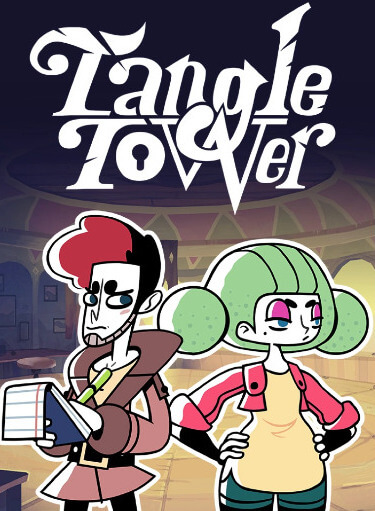 Tangle Tower is a murder mystery point-and-click game developed and published by SFB Games. It is a sequel to the 2014 game Detective Grimoire. The game was launched with the Apple Arcade service on September 19, 2019 and was later released for Nintendo Switch and Steam on October 22, 2019.

The game follows Detective Grimoire and his assistant Sally as they travel to the eponymous Tangle Tower to solve the murder of a girl named Freya Fellow, who was seemingly killed by a painting. Players progress through the game by conversing with the various suspects and searching each room of the tower for clues. Searching the environment will often unveil puzzles that must be solved in order to obtain a new piece of evidence. When certain conditions are met, the player can question each suspect about something they're hiding.

The original development of Tangle Tower was put on hold after Nintendo approached SFB Games to make Snipperclips, but resumed after the game's expansion, Snipperclips Plus, was completed. Due to Apple Arcade's requirements, the game was translated into 17 different languages by Universally Speaking.

Tangle Tower has received mainly positive reviews, holding an 85% score on Metacritic. The game was praised for its voice acting, dialogue, and art style.