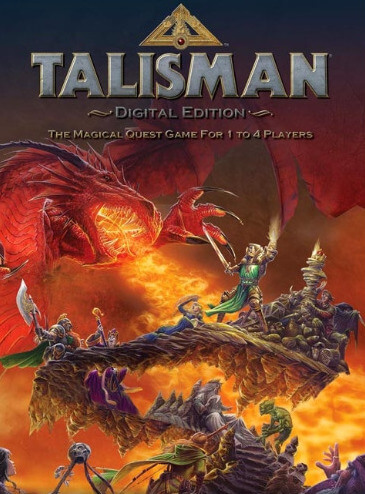 Talisman, a board game by Games Workshop, has been developed by Nomad Games for PC, Mobile and PS4 & Vita. Before the Nomad Games Version there were several attempts to adapt this board game into a video game since its introduction in 1983.

The first was a 1985 ZX Spectrum game. It was developed by SLUG and produced by the board game's publisher, Games Workshop. Another attempt, by Big Rooster Games in 2008 was abandoned and was labeled "a misfire" by Games Workshop. The third attempt by a fan of the game was released, but later removed. Finally Nomad Games released Talisman: Prologue, a single-player game for Microsoft Windows and mobile platforms, and finally Talisman: Digital Edition which is a true adaptation to the board game, with the expansions continuing to be developed. It's a cross platform multiplayer game on PC, Mac, iOS, Android and PlayStation 4 & Vita.

Games Workshop and Fantasy Flight Games partnered with another video game developer to produce a video game version. Nomad Games produced a single-player version of Talisman based on the Fourth Edition rules. It is titled Talisman: Prologue. It was released 15 November 2012 for Microsoft Windows.

A full multiplayer version of the game, Talisman Digital Edition, was released in October 2013.

The game is a conversion of the Second Edition of the board game. It is a fantasy hybrid board/role-playing game, in which players moved across a text-based virtual board, fighting creatures, collecting items, and strengthening their characters through experience. The ultimate goal was to defeat the other players, typically by reaching the Crown of Command on the game board.

The game was received somewhat favorably, but had no lasting impact.

Capcom had begun development in 2007 of a downloadable video game for both the PlayStation Store and Xbox Live Arcade. A version was also planned for Microsoft Windows. Based closely on the board game of the same name from Games Workshop, it was being developed by Big Rooster, but Capcom eventually announced they were seeking new developers.

Rather recently we have finally stopped development completely. After a misfire at the start, the details of which I won't get into, we evaluated several options for moving the project to new developers, but the costs of moving forward outweighted sic the potential revenue. I realize this will be disappointing for the fans of the game.

The rights have reverted to Games Workshop where I hope someone will pick them up and try again. I too still would like to play a Talisman videogame.

This digital version would have supported up to four players, either online or offline. Including 25 different characters from the game and its expansions, it also promised additional downloadable content, such as extra characters and alternate ending conditions.

In 2014, a new digital version of Talisman was released by Nomad Games, titled Talisman: Digital Edition.