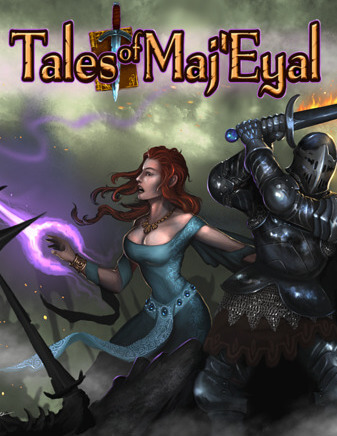 Tales of Maj'Eyal is a open-source roguelike video game released for Microsoft Windows, Mac OS X, and Linux in 2012. Tales of Maj'Eyal is available as donation-supported freeware (donationware) from the developers. Donations grant some exclusive online features (Freemium model). The game may also be purchased through the digital distribution outlets Steam or GOG. The game's TE4 game engine source code is under a GNU GPLv3 license, the game's assets are licensed for use "with the Tales of Maj'Eyal game only."

Tales of Maj'Eyal is a dungeon crawl featuring a customizable graphical interface that integrates classic roguelike keyboard commands with a mouse-driven interface. In a departure from many older roguelike games, Tales of Maj'Eyal has full-color graphics, can be played almost exclusively with the mouse, and despite permadeath the player can earn extra lives through various ways and leveling up.

Tales of Maj'Eyal emphasizes tactical turn-based combat and flexible player-controlled character development. Gameplay depends heavily on the player's decisions and ability to develop and execute strategy. Play begins with the player selecting one of nine races and one of 25 classes (expandable with addons). Not all character choices are available at first; some must be unlocked through in-game progress, or through monetary donation or purchase.

The player must explore Eyal, a lore-filled world containing numerous dungeons and adversaries. The plot is non-linear, and success depends as much on character planning and storyline choices as it does on the player's skill in defeating enemies in combat.

Players may register with an optional online game server, which allows them to view their characters, achievements and high scores. It also collates game statistics including the top killers of players, most common race/class choices, and number of wins. In addition, the game server offers an online chat system, letting players talk to each other.

Tales of Maj'Eyal was developed by Nicolas Casalini ("DarkGod"), with graphics by Assen Kanev ("Rexorcorum") and Raymond Gaustadnes ("Shockbolt"). It is based upon Casalini's earlier game Tales of Middle Earth, which in turn is based upon his own PernAngband variant, which was itself based on Zangband , which was in turn based on Angband. Development of ToME 4 started in 2009, and the first formal release occurred in 2012.

The T-Engine game engine is written in C, and offers a development framework for grid-based game modules written in Lua. It supports many OpenGL features such as particle effects and shaders. The T-Engine has been used to create games for the annual Seven Day Roguelike Challenge in 2011 and 2012.

Modifications may also be made to the Tales of Maj'Eyal game module through an addon system, including graphics, interface, content and gameplay balance alterations and additions.

Reviews of Tales of Maj'Eyal have been largely positive with praise being given for its accessibility, graphics, user interface, backstory and varied gameplay. US Gamer calls it "one of the very best roguelikes out there".