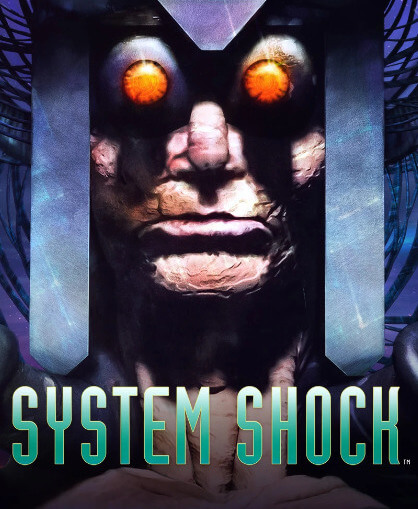 System Shock is a 1994 first-person action-adventure video game developed by LookingGlass Technologies and published by Origin Systems. It was directed by Doug Church with Warren Spector serving as producer. The game is set aboard a space station in a cyberpunk vision of the year 2072. Assuming the role of a nameless hacker, the player attempts to hinder the plans of a malevolent artificial intelligence called SHODAN.

System Shock's 3D engine, physics simulation and complex gameplay have been cited as both innovative and influential. The developers sought to build on the emergent gameplay and immersive environments of their previous games, Ultima Underworld: The Stygian Abyss and Ultima Underworld II: Labyrinth of Worlds, by streamlining their mechanics into a more "integrated whole".

Critics praised System Shock and hailed it as a major breakthrough in its genre. It was later placed on multiple hall of fame lists. The game was a moderate commercial success, with sales exceeding 170,000 copies, but Looking Glass ultimately lost money on the project. A sequel, System Shock 2, was released by Looking Glass Studios and offshoot developer Irrational Games in 1999. The 2000 game Deus Ex (also produced by Spector) and the 2007 game BioShock are spiritual successors to the two games. A remade version of the original game by Night Dive Studios is scheduled for release in 2020.

System Shock takes place from a first-person perspective in a three-dimensional (3D) graphical environment. The game is set inside a large, multi-level space station, in which players explore, combat enemies and solve puzzles. Progress is largely non-linear and the game is designed to allow for emergent gameplay. As in Ultima Underworld, the player uses a freely movable mouse cursor to aim weapons, to interact with objects and to manipulate the heads-up display (HUD) interface. View and posture controls on the HUD allow the player to lean left or right, look up or down, crouch, and crawl. Practical uses for these actions include taking cover, retrieving items from beneath the player character and navigating small passages, respectively. The HUD also features three "Multi-Function Displays", which may be configured to display information such as weapon readouts, an automap and an inventory.

The player advances the plot by acquiring log discs and e-mails: the game contains no non-player characters with which to converse. Throughout the game, an evil artificial intelligence called SHODAN hinders the player's progress with traps and blocked pathways. Specific computer terminals allow the player to temporarily enter Cyberspace; inside, the player moves weightlessly through a wire frame 3D environment, while collecting data and fighting SHODAN's security programs. Actions in Cyberspace sometimes cause events in the game's physical world; for example, certain locked doors may only be opened in Cyberspace. Outside of Cyberspace, the player uses the game's sixteen weapons, of which a maximum of seven may be carried at one time, to combat robots, cyborgs and mutants controlled by SHODAN. Projectile weapons often have selectable ammunition types with varying effects; for example, the "dart pistol" may fire either explosive needles or tranquilizers. Energy weapons and several types of explosives may also be found, with the latter ranging from concussion grenades to land mines.

Along with weapons, the player collects items such as dermal patches and first-aid kits. Dermal patches provide the character with beneficial effects—such as regeneration or increased melee attack power—but can cause detrimental side-effects, such as fatigue and distorted color perception. Attachable "hardware" may also be found, including energy shields and head-mounted lanterns. Increasingly advanced versions of this hardware may be obtained as the game progresses. When activated, most hardware drains from a main energy reserve, which necessitates economization. Certain hardware displays the effectiveness of attacks when active, with messages such as "Normal damage". When an enemy is attacked, the damage is calculated by armor absorption, vulnerabilities, critical hits and a degree of randomness. Weapons and munitions deal specific kinds of damage, and certain enemies are immune, or more vulnerable, to particular types. For example, electromagnetic pulse weapons heavily damage robots, but do not affect mutants. Conversely, gas grenades are effective against mutants, but do not damage robots.

Set in the year 2072, the protagonist—a nameless hacker—is caught while attempting to access files concerning Citadel Station, a space station owned by the TriOptimum Corporation. The hacker is taken to Citadel Station and brought before Edward Diego, a TriOptimum executive. Diego offers to drop all charges against the hacker in exchange for a confidential hacking of SHODAN, the artificial intelligence that controls the station. Diego secretly plans to steal an experimental mutagenic virus being tested on Citadel Station, and to sell it on the black market as a biological weapon. To entice cooperation, Diego promises the hacker a valuable military grade neural implant. After hacking SHODAN, removing the AI's ethical constraints, and handing control over to Diego, the protagonist undergoes surgery to implant the promised neural interface. Following the operation, the hacker is put into a six-month healing coma. The game begins as the protagonist awakens from his coma, and finds that SHODAN has commandeered the station. All robots aboard have been reprogrammed for hostility, and the crew have been either mutated, transformed into cyborgs, or killed.

Rebecca Lansing, a TriOptimum counter-terrorism consultant, contacts the player and claims that Citadel Station's mining laser is being powered up to attack Earth. SHODAN's plan is to destroy all major cities on the planet, in a bid to establish itself as a god. Rebecca says that a certain crew member knows how to deactivate the laser, and promises to destroy the records of the hacker's incriminating exchange with Diego if the strike is stopped. With information gleaned from log discs, the hacker destroys the laser by firing it into Citadel Station's own shields. Foiled by the hacker's work, SHODAN prepares to seed Earth with the virus Diego planned to steal—the same one responsible for turning the station's crew into mutants. The hacker, while attempting to jettison the chambers used to cultivate the virus, confronts and defeats Diego, who has been transformed into a powerful cyborg by SHODAN. Next, SHODAN begins an attempt to upload itself into Earth's computer networks. Following Rebecca's advice, the hacker prevents the download's completion by destroying the four antennas that SHODAN is using to send data.