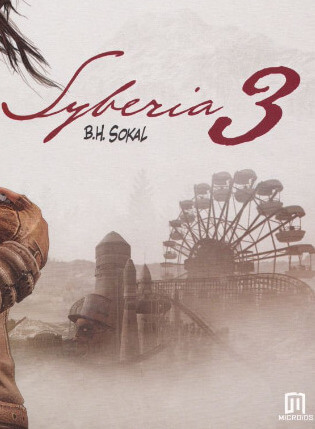 Syberia 3 is a graphic adventure video game developed by Microïds and published by Anuman for Microsoft Windows, OS X, PlayStation 4, Xbox One and Nintendo Switch. It is the third entry of the Syberia series which follows the adventures of American lawyer Kate Walker as she travels across Siberia.

After abandoning the island of Syberia, Kate Walker finds herself adrift on a makeshift boat, rescued by the Youkol people. Determined to escape their common enemies, she decides to help the nomads fulfill their odd ancestral tradition, as they accompany their snow ostriches on their seasonal migration.

The game also takes the player through the charming town of Valsembor, the voyage on a ship named Krystal, through an abandoned theme park in Baranour, which was tragically destroyed by a nuclear fallout and radiation still blocks off parts of the park. In the game, Kate helps the Youkols to find their lost temple and find the snow ostrich breeding grounds.

On 1 April 2009, Microïds announced that Syberia 3 was being developed and aimed to be released on Microsoft Windows and PlayStation 3 in June 2010 as a real-time 3D game. The company had stated that the game would miss its original June 2010 release date because negotiations with Benoît Sokal were under way and Microïds was then acquired by Anuman. On 17 April 2010, another press release was issued, explaining that the Microsoft Windows version will be released, but the PlayStation 3 version may not, due to problems with Sonyvague. Microïds had also asked that fans of Syberia send them emails of support for the game. In an interview given in February 2011, Sokal revealed that work on the game had not started due to a lack of funding.

In November 2012, Microïds revealed that Sokal had officially signed a contract with Anuman to write the story of Syberia 3, the development had started and the game will be overseen by Elliot Grassiano, the original founder of Microïds. The game was scheduled for release in 2014-2015. On 21 August 2013, it was announced that the game had gone into production. The game's first screenshots were shown on 13 August 2014, and the stated release was given as of 2015 on Microsoft Windows, OS X, PlayStation 4, Xbox One, iOS and Android. The game was released in April 2017, dubbed in English, French, German, Polish and Russian, with subtitles in Italian, Spanish, Dutch, Czech, Korean and Chinese.

In November 2017, a DLC file was released entitled "An Automaton with a Plan", where the player acts as the automaton Oscar.

Elise Favis's scored the game 5/10 on Game Informer and said "The Syberia series is a product of its time, and Syberia 3 doesn’t bring back any excitement. It is plagued by bugs, a disappointing storyline, cliché characters, and puzzles that are more frustrating than fun. This return fails to do the series justice, feeling more like an unpolished and dated adventure game instead of a revival."

GameSpot's Michael Highham scored the game 4/10 and concluded: "Slivers of enjoyment and potential are found within a disconnected and underwhelming journey. The characters, their interactions, the way they speak, and the reason they even exist all mash into a puzzle-adventure game devoid of significance or impact. The Syberia series deserved a better return, otherwise, it should've been left in the past."