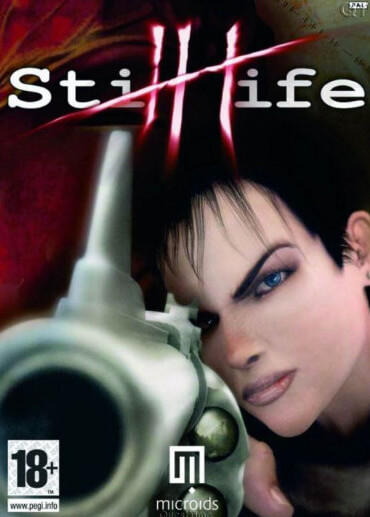 A major theme throughout the game is art, especially the technique of still life that the game is named after. The game also uses a storytelling device of switching back and forth between two player characters.

FBI Special Agent Victoria McPherson is investigating a series of brutal murders in 2004 Chicago. While visiting her father for Christmas she discovers an old notebook that belonged to her grandfather, private investigator Gustav McPherson. Victoria is surprised to learn that Gus had been involved with investigating a very similar series of murders in 1920s Prague. The player alternates between these two characters as they work to hunt down what seems to be the same serial killer more than 70 years apart.

In both cases the murderer targets sex trade workers: street prostitutes in Prague, and employees of an exclusive Chicago massage parlor and S&M club called the Red Lantern. The killer or killers are disguised in a dark cloak, top hat, and silver mask.

Gus eventually identifies the man responsible for the Prague murders, but the killer escapes justice and relocates to America. Near the end of the game Victoria discovers that similar murders occurred in 1931 Chicago and later in 1956 Los Angeles.

The identity of the 2004 Chicago killer is never revealed. Victoria encounters him several times, but never sees behind his mask. She does not believe he is the same person as the Prague killer, but rather a younger person who has been influenced by the Prague killer in some way. At the climax of the game, Victoria manages to shoot the Chicago killer, but he plunges into the Chicago river and does not surface. As the game ends, the Chicago police are still searching the river for the killer's body. Victoria plans to travel to Los Angeles to learn more about the 1956 killings.

A controversy surrounding the game is its lack of an ending. Originally planned as the second of a trilogy, with Post Mortem as the first, Still Life ends without revealing the villain. The story was meant to continue in a third game, but it seemed unlikely that the finalé would ever be made, as part of the development arm of Microïds in Canada was bought out by Ubisoft. However, on December 6, 2007, Microïds announced the development of a sequel, Still Life 2, which was released in 2009. On September 19, 2008 a new Still Life series website was opened, covering the three games.

Still Life was made with Virtools applications; the same software as Post Mortem and some other Microïds games. The point and click gameplay is also based on the first two games in the Syberia franchise.

According to Microïds, Still Life and its predecessor, Post Mortem, were commercial successes. The publisher reported combined global sales for the series above 500,000 units by September 2008. The worldwide sell-through of Still Life alone surpassed 240,000 units by May 2009.