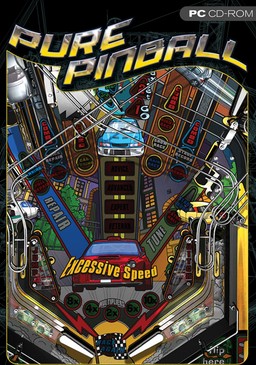 Pure Pinball: Steel Ball Magic is a pinball simulation video game franchise developed and owned by Swedish studio Legendo Games (known as Iridon Interactive at the time of the release of the franchise's debut title). Currently, five titles exist within the franchise, including four released games and one unreleased.

All released titles under the franchise name have been well-received, and are often praised for their outstandingly realistic pinball physics. The franchise's first title, Pure Pinball, received a total score of 8.7 out of 10 on Metacritic for its unique design and impeccable physics engine.

Pure Pinball: Steel Ball Magic games are all digital pinball simulators. That is to say, balls are released onto the central chamber of the board, and the player controls various flippers and bumpers throughout the simulated pinball table in order manipulate the ball into certain positions and score points. The games' engines mimic the physics of real pinball machines with precision and accuracy. Although every title in the franchise shares this central style, each game is equipped with additional themes. These themes involve not only aesthetic changes to the look of the pinball table upon which the games take place, but also unique sets of missions, challenges and game modes.

In-game, the player can choose any of the 12 different camera settings (for example – ball close-up, ball follow, complete overview and traditional scrolling style). This is made possible by the use of real-time 3D graphics. Pure Pinball also features true flipper control and a multiball-enabled physics engine which calculates the ball's movement over 1500 times per second.

Some sources cite a Hungarian developer as the original creator of the Xbox and Microsoft Windows debut of the Pure Pinball franchise, but the truth of the matter is somewhat contrary to this; developers in Hungary were contracted by Iridon Interactive as individuals rather than a full development team. The majority of the artwork and table design, as well as all music (composed by Carl Larsson, a staff musician at Iridon Interactive at the time), sound effects and voiceovers, were done by members of Iridon Interactive's development studio in Sweden. It is for this reason that the 2003 version indicates Iridon Interactive as the sole developer (and the now-defunct XS Games as the retail publisher for the North American markets). As such, the Pure Pinball franchise has its roots firmly planted in Sweden.

The first title of the franchise was published in North America by Simon & Schuster for Microsoft Windows and XS Games for the Xbox, released on May 28, 2003 and August 5, 2004, respectively. In Europe, the PC version of the game was self-published by Iridon Interactive and localized to German, Russian, Spanish, Italian, Polish, Hungarian, and Czech markets by Iridon Interactive and distributed by an assortment of sales partners, including Koch Media in Germany.