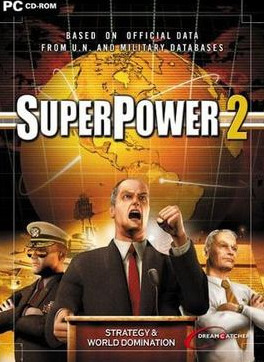 SuperPower 2 is a real-time strategy wargame developed by Canadian based GolemLabs and published by DreamCatcher Interactive in 2004, following SuperPower. It was released between October 11 and November 19, 2004 in North America and Europe, respectively. On April 18, 2014, Nordic Games officially released SuperPower 2 on the Steam Store.

Players may join a game as any of the 193 nations recognized by the United Nations at the time of its development. All standard games start in the year 2001, with the player taking control of their nation. They then must work toward their predefined goals, such as achieving world peace, balancing your nation's resources, or conquering the world, or, if they did not set any predefined goals, they have the opportunity to work toward developing their nation's infrastructure, increasing their military strength through new unit designs and development, and encouraging the economic and cultural growth of their nation.

Any nation not controlled by a player is considered an AI nation. If there are predefined objectives, the player will attempt to reach this objective to win the game. The AI will have their own objectives, which they will try to reach as well. If and when the player and the AI have conflicting goals, it is up to the player, and occasionally the AI, to decide if diplomacy is the way to go, or if war is the answer to their problems.

Because SuperPower 2 is a real-time game, there is no preset end date. This means that a single game can, in theory, run indefinitely.

Political sphere consists of all political activity, domestic and international, of the selected nation. This sphere allows players to see (and modify if own nation is selected) internal laws, government type, and diplomatic agreements.

The Military sphere consists of all military and covert operations. This sphere allows players to buy, sell, build, train, deploy, disband a variety of military units. It also allows players to train intelligence cells and conduct covert warfare. In addition, strategic warfare is controlled from this sphere.

Strategic warfare consists of nuclear missiles being launched from land based locations, or from submarines. Nuclear warfare is devastating for both the attacker and the victim. When a nuclear missile is launched and detonates in another nation, relations with nations around the world decline, depending on the importance of the nation attacked. The attacker's nation also becomes less stable, increasing chances of a revolution.

The economic sphere consists of all financial activity. From this sphere player can view (and control if the selected nation is the same as the player's) income and expenses as well as trade and taxes. Players can set national interest rates, income tax levels, tariffs, and spending levels in this sphere. Players can also nationalize or privatize portions of their economy. This is also where the "Autarky" bug does most damage because in the game trade is almost always the most income generating source and when the bug sets in, this well of wealth inevitably dries up when no other nations buy your goods. However, playing country with high levels of raw resources like South Africa with precious metals, seems to not fall victim to the bug as quickly as countries relying on services and agriculture. Also, by invading nearby countries followed by annexation and high levels of taxes can also stave off autarky. At this point however, convincing the rest of the world not to invade is a bigger problem.

Although slightly improved over the original SuperPower, the sequel received "mixed" reviews according to the review aggregation website Metacritic.

Many critics referred to the game as highly ambitious but critically flawed. One of the most positive reviews, from GameZone, said that "The number of options, the good graphics for the globe and almost limitless gameplay adds up a game that is worthy of United Nations attention."

However, many high-profile gaming publications panned the game, with common criticisms including frequent crashes, a poorly designed user interface, features that were either not implemented or apparently ineffective, and frequent implausible, nonsensical, and unexplained events occurring during the game (such as Poland declaring war on Burkina Faso for unclear reasons). A reviewer for GameSpy described SuperPower 2 as "a bunch of pointless hand-waving in a half-hearted attempt to pawn off a ponderous spreadsheet as a game", also stating that "...because the game is so devoid of personality, it's not even engaging as a way of experimenting with nightmare scenarios. There's nothing satisfying about taking control of the U.S. and changing it to a military dictatorship without freedom of speech or women's suffrage, only to see your political standing inch to the right and maybe your approval rating dip for a while." IGN was also critical of the game, giving it a score of 4.5 out of 10 and stating, among other things, that "The art of international war itself is conducted here according to principles that would make Sun Tzu burn his book and restart life as a caterer." The game also features plenty of mods to choose from which change and edit the game play to specific real time or fictional settings.