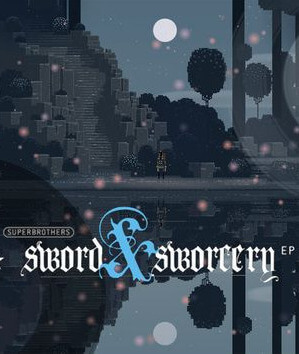 Superbrothers: Sword & Sworcery EP is an indie adventure video game created by Superbrothers and Capybara Games, with music by Jim Guthrie. It was initially released for iOS devices, with a version for Microsoft Windows via Steam coming later. Mac OS X and Linux ports were included with the release of Humble Indie Bundle V, while a port to the Android platform was released as part of the fourth Humble Bundle for Android. Additionally, a port to Nintendo Switch was released, combining both mobile and computer-like control schemes, as well as adding controller support. The iOS and Android versions make use of device orientation during gameplay.

The user taps where they want the character, a Scythian warrior, to go. The accelerometer is incorporated into the gameplay, with the user turning the device 90 degrees to make the character take out their sword (the PC version uses the right mouse button). The player taps the shield button or the sword button to use them. Most of the dialogue is done through thoughts, once the user has acquired the "Megatome", a magic book that lets the character read people's minds. The character can jump between two worlds; the "real" world and the "dream" world. The user jumps from one world to the other by letting the character sleep, which is done through making them sit down at a specific place in the game. If the Scythian's health is diminished during a conflict, it can subsequently be restored by finding and consuming small, red mushrooms. Eating these mushrooms also activates a special musical track, only played in such an event.

Certain events and passages of play are only allowed to occur if the moon is in a certain phase, thus real world time affects the gameplay. However, moon phases can be skipped by visiting the "moon grotto". This is a hidden cave that is unlocked late in the game. Entering this cave will also play a unique musical track that can not be found on the official soundtrack. The Scythian can talk to the girl at the beginning of the second "session", and in turn she will tell the Scythian how to sing a "song of sworcery". The user can activate this ability by tapping and holding on the Scythian (clicking and holding on PC), this will initiate the "song". Songs of sworcery can be used to find sprites and change the world around the Scythian in order to find trigons.

In the game, there are 4 "sessions". In Session I, The Scythian travels through the countryside near the Caucasus Mountains on a quest. She meets a black-haired girl, colloquially called Girl (Samae in the Switch version), tending to some sheep in a meadow near the start of her journey. Eventually she comes upon a man cutting wood named Logfella, and a dog named Dogfella. Logfella reluctantly agrees to lead them to the mountain Mingi Taw. The path ends at a canyon, on the other side of which is a massive face carved into the mountain, the mouth being an entrance to a cave.

The Scythian raises her sword under a rainbow near the canyon and a "tongue" extends from the mouth. The Scythian crosses into Mingi Taw alone. The Scythian arrives at her goal deep under the mountain: a book of powerful "sworcery" known as the Megatome. The Scythian's sword reacts to the presence of the Megatome, and she uses it to cut the book free from the skeletal hands that hold it in place. Suddenly, the hands and an antlered skull hovering above it come alive and chase the Scythian through the caves of Mingi Taw. The Scythian escapes, but the eyes and mouth of the face on Mingi Taw close and exude black smoke, and a thunderstorm begins overhead. A wolf-like creature with three eyes pursues the Scythian, the dog, and Logfella as they make their way to Logfella's cabin. The first "session" ends with the Scythian triumphant having obtained the Megatome.

Afterwards, the player is presented with the second session by "The Archetype". He monitors the Scythian's progress throughout the story, calling her journey a series of tests, or sessions. Shortly thereafter, the player returns to the Scythian, teleporting to a platform east of Logfella's cabin. The Scythian makes it back to Logfella's cabin, where Girl suggests awakening several nearby sylvan sprites – mystical creatures that grant miracles to those who summon them – to break up the thunderstorm. She reminds the Scythian that these sprites emit bubbles (which could be interpreted as a scent) and a specific sound whenever they are around. The Scythian travels the countryside, locating the three sylvan sprites and breaking up the thunderstorm. To reach the third sylvan sprite, the Scythian traverses to the side of Mingi Taw, but the door to the path leading there is locked. Logfella, who holds the key, tells the Scythian that he lost it while dreaming. He explains that by sitting near the hearth of the fire inside the cabin one enters a dream space.

Inside the dream, the Scythian watches a Boor who's dancing about. Approaching it, the Boor begins to run away. Following it, she reaches the side of a lake, where Logfella's key is. With it, she travels to the side of Mingi Taw to awaken the third sylvan sprite and break up the storm. When all the sylvan sprites are awakened, Girl and Logfella see this event as a "time of miracles", as told in tales between folks of the Caucasus. Once the storm has passed, a mysterious light emanates at a maze-like structure in the meadow near Logfella's cabin. After chanting a song of sworcery, a geometric figure appears. This geometric figure, an upside-down triangle, is recognized in the Megatome to be the "Golden Trigon", a piece of the Trigon Trifecta. Approaching the Golden Trigon, the Scythian readies her sword and shield as it begins to attack. The Trigon's attacks begin with a projectile-like beam before progressing to lasers being shot out of an eye-like figure which the Trigon assumes, all of which follow the pattern of the song being played during the battle. After defeating the Golden Trigon, the Scythian stores it in the Megatome, and the session ends.