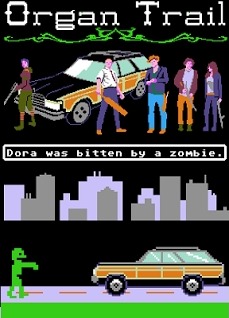 Organ Trail is a "retro zombie survival game" that parodies the educational game series The Oregon Trail. It was initially released as a free Adobe Flash-based browser game, and later as a Facebook app. This version was developed by Ben Perez, Michael Block, and Ryan Wiemeyer. The game uses the Unity game engine.

An expanded version, The Organ Trail: Director's Cut, was released on mobile devices in August 2012. That same month the Director's Cut was also posted on Steam Greenlight; after receiving enough support, it was released on Steam for Windows, Mac, and Linux on March 19, 2013. The expanded version was developed by Michael Block and Ryan Wiemeyer, founders of the company The Men Who Wear Many Hats.

Director's Cut has sold 429,192 copies as of August 9, 2013. Most of the copies were sold on Humble Bundle, Steam and iOS. Most profits were made on the Steam and iOS platforms.

In The Organ Trail, players must cross a post-apocalyptic United States in an old station wagon in order to reach a sanctuary free of zombies. Players must manage their limited resources, including food, ammunition and fuel for their vehicle, in order to complete their journey and keep everyone in their party alive and healthy.

At the beginning players can choose from a number of characters to play as, including a cop from Kentucky, a clerk from New Jersey, or a lawyer from Miami. Each character has different bonuses in gameplay. For example, the cop will offer more hours for the player to scavenge for supplies at the beginning of the game but will earn fewer points if the player beats the game, while the lawyer will give the player the least amount of time to scavenge for supplies but will earn the most points.

The Organ Trail's popularity led its developers to start a Kickstarter to fund a "director's cut" of the game based on fan feedback and suggestions. The Director's Cut features a number of changes to the original game, including a customizable protagonist instead of the above preset characters, "choose-your-own-adventure" style random encounters, boss fights, in-game achievements and online leaderboards. While the original game has been described as a "1:1 pure parody" of The Oregon Trail, the developers decided The Director's Cut should stand on its own as a title that pushed beyond the source material.

In contrast to the original game which is free to play, The Director's Cut is a commercial product. It was released for iOS and Android devices on August 9, 2012. It debuted for Linux, Mac, PC and Android via The Humble Bundle.

Into the Stars
hit
upd
new