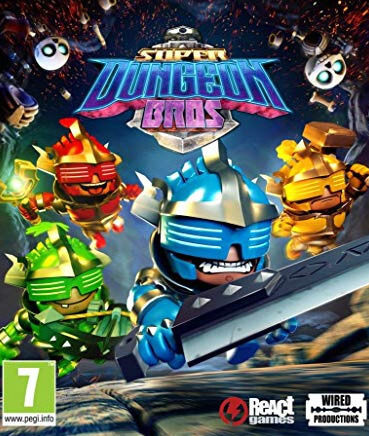 The game takes place in the fictional realm of Rökheim which comprises the worlds Cryptheim, Chillheim, and Bogheim, each of which is modeled after a different theme (underground, snow and jungle, respectively). Each location features a randomly generated layout that varies with every playthrough.

Super Dungeon Bros plays in a vein similar to the Diablo series. Players select one of four characters and traverse a labyrinth, slaying enemies and collecting loot while completing an overall objective. Puzzles and light platforming are also encountered throughout the dungeon. Weapons can be found and equipped by the player, each one varying in the amount of damage dealt and style of play (for instance, there are ranged and melee weapons). A "threat meter" tracks play time in a dungeon, with a more powerful boss spawning the longer it takes a player to complete an area. The title has elements of a roguelike game in that a set number of lives are given, and once diminished the game is over. Up to four people may take part at once, either locally or in online co-op. In multiplayer, the lives pool is shared.

Alongside online leaderboards are daily and weekly dungeons, which are unique locations only playable during a certain time slot. Cross-platform online play is available between PlayStation 4 and Windows/Mac users as well as Xbox and Windows 10 players.

After numerous delays, the game was released worldwide on November 1, 2016 for PlayStation 4, Xbox One and personal computers. THQ Nordic simultaneously published physical copies in North American and PAL territories. At launch, the game was available for free during the month of November 2016 on Xbox One as part of the Games with Gold service.

The title has received numerous updates since launch. The "broettes" (female equivalents to the four main male characters) were available as a free download for a two-week period after launch before becoming a paid add-on. Updated 1.02 launched for PlayStation 4 and personal computers on December 20, 2016 which included various fixes for glitches, improved load times, the ability to customize the number of players in a game (previously four were required to play) and private match making lobbies. Additionally, compatibility for OS X was added, with Steam players receiving a free download for the Mac version. This patch launched on Xbox One in early 2017.

Super Dungeon Bros received mixed-to-negative reviews upon release. the game holds scores of 45.1% (PC), 50% (PS4) and 50.71% (Xbox One) on GameRankings, while also holding averages of 42 (PS4) and 53 (Xbox One) on Metacritic. Generally the cooperative play was praised but the game was heavily faulted for various technical shortcomings.