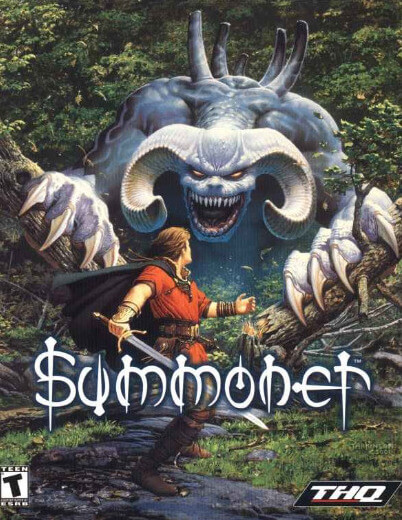 Summoner is a Western action role-playing (RPG/WRPG) video game developed by Volition and published by THQ. It was released as a launch title for the Sony PlayStation 2 in 2000, and was subsequently ported to Microsoft Windows and Mac OS the following year. In the game, the player plays the role of Joseph and can assemble a team of compatriots and summon powerful monsters. The game has a world map, involved storyline, and unique hybrid combat system involving real-time and turn-based mechanisms.

A sequel, Summoner 2, was released in 2002, and would be the last game in the Summoner series.

After the bankruptcy of publisher THQ in December 2012, the Summoner franchise was acquired by Nordic Games, who have since published Summoner on GOG.com (February 25, 2014) and on Steam Digital Distribution platform (March 12, 2014).

In addition to the main storyline, there are over twenty side quests that may be completed. Summoner's combat system is a hybrid system incorporating real-time and turn-based combat, with characters essentially "taking turns" to attack during real-time gameplay. Included within this system is a unique "Chain attack" mechanic, in which players can extend their "turn" by performing special melee attacks at the appropriate time. If done correctly, players can "chain" these special attacks into long sequences, inflicting far greater amounts of damage than they might otherwise have. These special attacks can also have special effects such as inflicting status effects, damaging an enemy's action points or inflicting more health damage than normal. Characters can also acquire and use a variety of special abilities and spells, expending "action points" in order to use these abilities. The game's Summoning mechanic allows the player to conjure monsters that will serve as additional party members, allowing the player to have a 5-character party instead of a 4-character party. These monsters have their own spells and abilities that they bring into combat, but will go rogue and attack the player's party if Joseph is defeated in combat.

Scott Lee was the main composer and senior sound designer of Summoner and did most of the game music with Dan Wentz helping on the soundtrack towards the end of development near gold master. Wally Shaw did sound design and some editing of music towards the middle of development. After interplay went bankrupt, Lee provided the first tech demonstration for THQ. During this time Lee and Wentz also worked on the early Descent 4 trailer music, which later rebranded into Red Faction for legal reasons and FreeSpace 2.