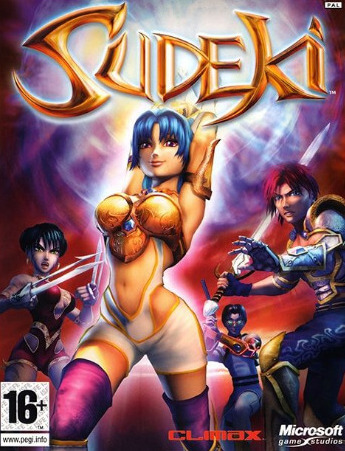 Sudeki is an action role-playing game developed by Climax Solent and initially published by Microsoft Game Studios as an Xbox exclusive in 2004. It was later ported to Microsoft Windows, released by Zoo Digital Publishing.

The game is mostly played in real time, controlling one character at a time; when the party has multiple characters, the player can switch between them and unleash powerful abilities unique to each character, known as Skill Strikes and Spirit Strikes. The combat system is relatively complex for an action RPG, as it utilises various button combos based on timed button presses, similar to some fighting games. Out of the four characters, half are melee and the other half are ranged; this results in some combat to be played as a first-person shooter.

Outside of combat, the game plays as an RPG, but in hostile environments without non-player characters, the characters often have to use their unique external-combat abilities to solve puzzles to progress, be it block puzzles with Tal, dispelling with Ailish, climbing challenges with Buki or flight with Elco. A myriad of side quests are available if spoken to the right people, often done by collecting items for said persons. A wide range of items can be collected, those not for medicinal purposes are often collected to sell or complete quests. A portal system is used as transport between areas later in the game.

Tal's father left his family in order to pursue a place in the Illumina army, leaving Tal and his brother to be raised by their mother. The war claimed the lives of Tal's brother and mother, leaving him alone. Lacking a role model in life, Tal sought out to prove himself and soon joined the Illumina Guard, only to be put under the command of his own father. Though a strong swordsman, memories of the loss still haunt him. He happens to be the descendant of Kariston the Wolf and his weapon of choice is the sword.

Daughter of Queen Lusica and princess of Illumina, Ailish has lived her life in royalty. Since she was young she was gifted with magical abilities. Her father, Baron Felson, died a tragic and mysterious death when Ailish was conceived. She was led to live a sheltered life that left her yearning for more, to go out and venture into the world. Though she lacked friends of the same stature as herself, her only friends are Yemi and Tilly, her servants. She usually likes to sit at her balcony and watch Tal train in the courtyard below. She is the Descendant of Olivetess the Eagle and her chosen weapon is a staff. When fighting with Ailish, the view goes into first person.

The huntress Buki's parents were leaders of the hunting pack that provided food for the people of her village. When a great plague struck the village, all of the adults died leaving the children on their own. The village shaman saw this as a way of renewing the tribe, so he took Buki under his wing and trained her. She is an Anthropomorph, a race of half-human half-animal beings sharing the world with humans. She holds great respect for the mystical world and honors the deities that watch over it. Buki is also a formidable warrior, she is the Descendant of Mo the Great Cat and her weapon of choice are wrist mounted blades.

A tireless scientist and inventor, Elco is extremely smart for his young age. He lost his left arm in an industrial accident and endured the pain of grafting a mechanical arm in its place, paid for by queen Lusica. He is mistrustful of mystical beliefs that are not grounded in the world that he can see and understand, but his loyalty to his friends and his liege is unquestionable. He is also married to Tilly, who he holds highly above everything else. He can be heard talking Dutch with one of his professors, implying it to be the language of his hometown. He is the Descendant of Lebius the Dragon and his weapon of choice is a gun. When fighting with Elco, the view goes into first person.

Sudeki was met with fairly positive reception. Aggregating review sites GameRankings and Metacritic gave it a score of 73.36% and 72 out of 100 for the Xbox version, and 68.25% for the PC version.

In a review for The Washington Post, Tom Ham praised the enormousness of the game, the aesthetically-pleasing graphics and the combat system, but also noted that it was too short at only twenty hours of gameplay, and lacked replay value with no online play or unlockable features. The review concluded that it was worth renting but not buying. John Walsh of Maxim gave the game a perfect ten, stating: "Action fans might balk at what sounds like a standard role-playing game opening, but Sudeki soon bursts into the most intense, bone-crunching combat you'll find on any platform."

The Times gave it a score of four stars out of five and called it "a competent debut, but, despite the oriental touches, it isn't in the epic Final Fantasy league." However, Jason Hill of The Sydney Morning Herald gave it three-and-a-half stars out of five, writing: "Despite the game's terrific combat, Sudeki is sadly let down by a plodding story, clumsy dialogue and forgettable characters."