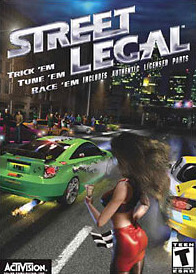 
Street Legal is a street racing video game made by Invictus and Activision with a heavy emphasis on car customization.

The game takes place in the fictitious Valo City. There are four sections of the city, although only one is unlocked from the beginning of the game. Other parts of the city, as well as more available cars and upgrade parts, are unlocked by racing against CPU drivers.

The cars in the game are all fictitious look-alikes of real vehicles. Examples are the "Ninja", a vehicle resembling a Honda Civic hatchback but bearing resemblance to other hatchbacks, and the "Badge", which mimics the Dodge Charger.

The gameplay is highly mechanically-oriented - nearly every part on every car is replaceable. While the level of detail is not quite equal to that of the sequel game, Street Legal Racing: Redline, entire engines may be replaced and almost all body parts can be removed from the vehicle. Damage in the game is also highly detailed - unfortunately, there is no way to repair the entire car after it has been damaged, meaning that repairs are costly and require lots of time to make.

The game, developed in 2002, has relatively advanced graphics for its time. However, the game's coding was written in a way which made it run slowly, even on computers which met the recommended system requirements. Patches have been written for the game which improve the game's performance greatly and reduce the number of bugs.